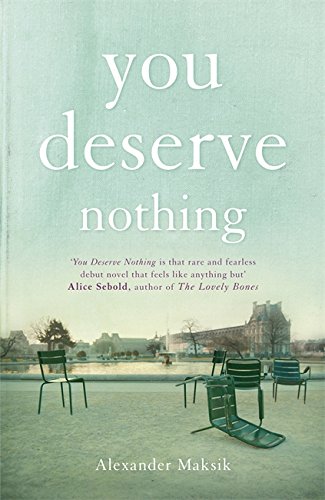 “You Deserve Nothing is a promising début. Alexander Maksik is a skilful writer, and this novel shows a commitment to serious literature.”

Set in Paris, this first novel by Alexander Maksik recounts life at the “International School of France” through intertwined and contrasting first-person narratives. Gilad and Marie are students at the school; William Silver is a charismatic teacher. Silver inspires and challenges his students with readings of Sartre, Camus, the Book of Job, and other works exploring the human condition. Over the course of the school year these protagonists share not only ideas but also various forms of intimacy, including sex, which tests them in new and unexpected ways.

On the surface, You Deserve Nothing might sound like another serving of expatriate wine-and-cheese, in which the pseudo-worldliness of Diane Johnson meets the Dead Poet’s Society. Fortunately, Mr. Maksik largely avoids these clichés by refusing to flatter his characters and by putting some of Silver’s lofty ideas to the test. He writes about both the uses and limits of literature when confronted with the messiness of life.

Marie is an insecure, volatile teenager; her rivalry with her erstwhile friend, Ariel, is ably depicted, with its unhappy combination of youthful intimacy and cruelty.

Gilad, perhaps the most appealing narrator in the novel, is an intelligent but vulnerable boy; he is more cerebral than his peers but is sometimes creepily close to his mother, or at least to an idealized image of her youth. Gilad’s eventual confrontation of this problem provides the novel’s most satisfying scene. The actions of all these characters take place against the backdrop of the ideas discussed in Silver’s senior seminar. In various forms the question keeps coming back: what does literature have to tell us about how to live?

In this respect, You Deserve Nothing resembles Azar Nafisi’s popular memoir, Reading Lolita in Tehran. There is the same enthusiastic professor, holding forth about art to a circle of young acolytes. But, though the stakes here are lower—these pupils are, after all, privileged teenagers living and partying in the posher corners of Paris, a far cry from the post-revolution victims of Iran—Mr. Maksik’s treatment is better. His style is less ponderous and moves nimbly from work to work. Silver’s readings of canonical literature are standard fare but they are always congenial and, mercifully, they don’t sound like canned lectures.

This informal yet serious tone derives in part from the setting, which is the kind of school where students call their teacher “Dude” and give big American-style hugs. There are few French characters besides Marie (who expresses herself in idiomatic American English and whose family is largely absent). French popular culture, its prickly rhetoric and music and pervasive television, does not figure here. Although Gilad mentions exploring the city on foot and visiting the Goutte d’Or, the novel’s action mainly takes place in the seminar room or in the comfortable neighborhoods and bars of the sixth and sixteenth arrondissements. Conspicuously, no one worries about money.

A glimpse of another kind of France occurs in a set piece describing an antiwar protest, which proves to be a crucial incident in the students’ perception of Silver. It also gives Mr. Maksik a chance to show a broader range. He does a good job in capturing the shambolic atmosphere of dissent in the run-up to the Iraq War, which marked not only Paris but other European capitals, with its curious mixture of principle and opportunism, as serious protestors, clueless high-schoolers, and bored hooligans shared the stage with riot police. It was a memorable time which has often been distorted, but which rings true here.

You Deserve Nothing is a promising début. Alexander Maksik is a skilful writer, and this novel shows a commitment to serious literature.