You Cannot Shoot a Poem: Poems 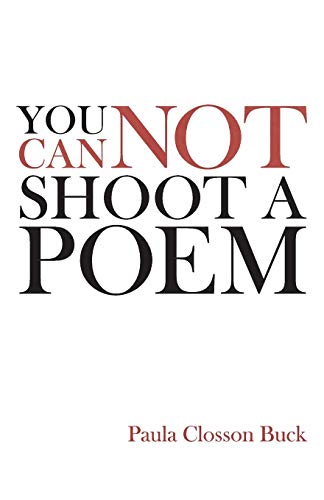 “Buck’s poems are startling, insightful, and inscrutable. The reader may conjecture what the poems mean but without the comfort of ever knowing. That’s good poetry.”

A poet is much like a private library shrouded in darkness and readers are much like permitted intruders who must first find the switch, if there is one, to turn on the light and view the interiority. Understanding a poet is an undertaking, not always easy.

Paula Closson Buck is not an easy poet unless you read her poems a few times and have or acquire background knowledge of subject matter of the poems. She grew up in Niagara Falls, New York, and has spent years in various Mediterranean countries, particularly Cyprus, and now teaches creative writing at Bucknell University, a private liberal arts college in Pennsylvania. All this miscellany is vividly and furtively present in her latest book, You Cannot Shoot a Poem.

You can shoot a film but not a poem, says Buck. Shooting a film requires looking outward and framing what is outside the camera. Capturing a poem is much more complex than recording a scene. Poetry is not mind over matter but mind over the mind and matter under the matter. Created with such an orientation, Buck’s poems are startling, insightful, and inscrutable. The reader may conjecture what the poems mean but without the comfort of ever knowing. That’s good poetry.

The book is divided into four parts. Part I contains seven poems under the caption Niagara Exhibition. Part II contains 12 poems under the heading Dead Zone Vertigo. Part III contains nine poems under the banner Bestiary. Each poem in this part is about animals, including damselfly, tigers, and octopus. Part IV is a single long poem or a collage of several mini-poems.

The readers may not know whether and how the parts of the book are related to each other. What brings them together is, of course, the poet’s unknowable interiority.

If there is any one thing that permeates all parts of the book, it is “loaded for spectacle/with exotic animals.” In addition to Part III that is all animals, all kinds of animals, dead and alive, also turn up in other parts of the book.

Part I, Niagara Exhibition, begins with a poem involving Jesus, “the name of so many miseries.” Next is Father Hennepin, a Roman Catholic priest, the “first man to record the (Niagara) Falls.” Then is the Love Canal, a neighborhood within the Niagara area, earning dishonor in the 1950s as a dumping place for chemical waste, such as “chlorobenzenes.” Periodically, “Chemical cocktails bubble up at the neighborhood party.”

The Exhibition offers a poem about the ermine, a weasel with white fur. The poet sees her blonde sister in the ermine “who would rather die than soil its white fur.” Exploring further, Buck writes a poem about “two-hundred-eighty thousand radioactive mice and rats in the ground near Niagara.”

Part I ends with a poem damning Father Hennepin, the discoverer of the Falls, “as a colossal liar.” The poet sees the Niagara toxicity scattered all over the world—in Wonder bread, in Hiroshima and Nagasaki, as Agent Orange in Cambodia. Expressing poetic longing for the pre-Hennepin Falls, Buck finishes the Exhibition with a question: “Is beauty just another form of ignorance?”

Part II, Dead Zone Vertigo, poems are about the Mediterranean history and conflicts involving Turkish Cypriots and Greek Cypriots. Varosha is the ruined part of the Cypriot city of Famagusta destroyed during the 1974 Turkish-Greek war. The poems in this part lament the Cyprus tragedy of division, interethnic hatred, and ask us to listen to “the voices of gulls and girls from the beach beyond the heavily guarded chain-link fence.”

This part carries several poems strewn with memorable lines knitted with simple words. My favorite is the poem, The Negotiation. “Why have I given up nearly everything/and you almost nothing at all.” These lines seize the deepest mutual mistrust when any parties are negotiating a settlement, from divorce, war, to trade disputes. Each aggrieved party is reluctant to yield anymore to achieve a deal. In Cyprus, the negotiators express frustration even with God “who long ago abandoned his chair on this beach.”

A few poems in Part II are written as paragraphs. And there is “a poem in blank verse.” It is indeed an interactive poem, as the reader can fill in the blanks to complete the lines.  “History will ———/ our names. But I’d say yours if I thought/ I might see you again at ———.” I chose the word delete and my teen boys the word forget to complete the first line. The words we selected to complete the last line varied from “the park” to “the café” to “the gates of heaven.” This was fun.

There is no correct answer to any poem, much less a poem with missing words. Each reader may pour his or her own existential anguish or joy in the blanks to make sense of the poem. But this is true about all good poetry.

As noted above, Part III, Bestiary, is a collection of poems donning various animals. The birds and beasts recruited in these poems throw light and darkness on the human condition. “What the sky/wants to tell us/is written in Damselfly.” “The dictator’s sister/who abandoned the place years ago/left behind these guinea fowl/with their tiny, tortured/heads.”

In some poems animals and humans interact literally, and in others metaphorically.

There is the “little Hindu” riding “a caparisoned elephant.” The Seal “dumps excrement onto the rocks/and does not cry Shit!”/ She copulates but under duress does not mutter Fuck!” Moths “flit and baffle/like a mother-in-law” but do not “wear the little wigs of justice.” And for the blessed sheep “Is there any shame/in being shunted with the herd/east-southeast in moonlight?”

You Cannot Shoot a Poem is a poetry book about nature after its human conquest that has infused raw beauty with radioactive terror. It is a book about stunning beaches ravished by ferocious armies fighting for sovereignty. It is a book about birds, sea creatures, and land animals that have been ignored, tortured, or made subservient, some ornamenting the zoos.

For sure, the book is political if not ideological. Yet the mood of the poems is far from being despondent or rebellious. The emotion steering each poem is restrained, almost contemplative, inviting the reader’s muted reactions. Here and there, the poetic mischief is deliberate and efficacious. “And when the Marco Polo returned/ from the Orient with tales to tell/they called him/Marco of the Million Lies.”