You Can Be Right (or You Can Be Married): Looking for Love in the Age of Divorce 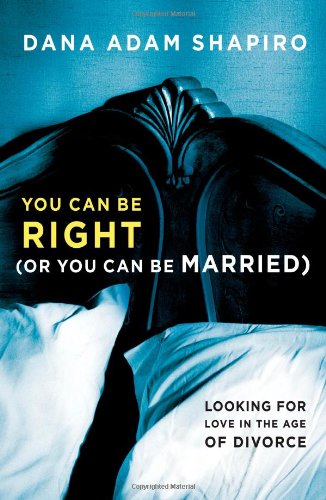 So begins You Can Be Right (or You Can Be Married) by confirmed bachelor Dana Adam Shapiro. The author is 38, a serial monogamist, and had been single for two years when he started this book. Nearly four years ago his last relationships, like three previous ones, ended with “the three year thud” that comes when it grows obvious that a partner is not to be for life.

Women have knocked his socks off, but in the end he always seems to get cold feet.

Says one of the women he quotes, “Passion? I know it’s overrated. That adrenaline rush, it’s not real. Whenever you’re living in passion, you’re living in fear that you’re going to lose something. And if you live in that fear all the time, you’re not acting out of your heart.”

Traveling across the country, he interviewed divorced strangers about why love dies. His conversations, structured by a questionnaire, reveal honesty, insight, and humor. Strangers answer questions and tell him stories even close friends might not share.

Says one man, “Women do not understand that if they deny their husbands sex, they [the husbands] will get it somewhere else. Women use it as a weapon and have no idea how many men have paid for sex or had one-nighters, whether it’s a hand job at a strip club, a call girl, or even a drunk girl at a bar. If they truly knew the percentages, at least among the people I know, they would be astounded to the point where even the Girl Scouts would teach that a woman’s duty is to make sure her husband is completely drained of all cum before he leaves the house.”

Author Shapiro transcribed all of the interviews, organizing them into sections: Accelerating the Inevitable, Discussing the Dirty, and Engaging the Elephants. The stories he presents are engaging and fun. One may not always agree with his interviewees, but they present the spectrum of views on marriage in ways most of us can relate to—even if they do not always resonate.

Diane, 67, explains the difference between making love and sex. She gave her husband sex whenever he asked. “Okay, do whatever you need to do, just put me back when you are done.”

The stories are surprisingly articulate and stylistically uniform. In the end, we may not be more adept at relationships, but we will certainly be more aware of what we are doing.

One woman who describes being married to a preacher never really was in love, but faked it—as did he—and put up with traits she did not really like. She is done with marriage. “I have reached my crap quota for this lifetime. I love my dog and he loves me. It works.”

After the interviews Mr. Shapiro has two epiphanies. The first is when he develops a passion for a woman he has only met once in person. She is in many ways his opposite. She believes in the power of crystals to channel energy to her chakras. He describes her glowingly and with humor.

After knowing each other for just six hours, as they lay together in bed, he finds out that she has a jade crystal lodged against her cervix—and he discovers this because she tells him about it. (Perhaps the author has good reason not to include a discussion of whether size matters). By the last page, we are wondering whether the relationship will develop.

And the second epiphany is that he does not care about the guy who put an ad in the Casual Encounters section of Craigslist. He just wants to make sure he is not the kind of husband whose wife would answer one.