You Are Next (Karin Schaeffer) 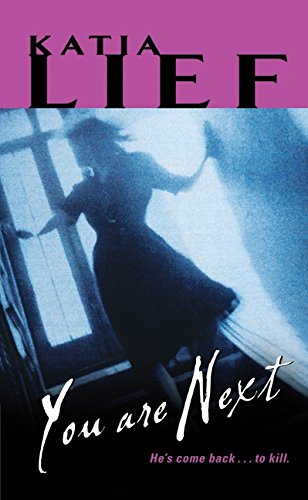 Katia Lief’s debut thriller, You Are Next, opens with Karin
Schaeffer gardening in the small yard of her Brooklyn, New York,
brownstone apartment. It denotes a placid scene, as the reader is lulled
into a comfort zone.

Suddenly, a lightning bolt of information spews forth and soon the pages
fly by as Karin shows the reader the remnants of her life. The
gardening is the brainchild of her therapist, “once a week Joyce,”
hoping to bring tranquility back to a shattered soul. Karin, after one
attempted suicide, still wants to die.

Policewoman Karin Schaeffer has stumbled upon the serial killer Martin
Price by sheer luck. Hearing a noise from a presumed empty chemical tank
in the area that her unit was searching, she discovers him asleep on
the bottom of the tank and arrests him. The Domino Killer, aka JPP (Just
Plain Psycho) leaves dominoes by his victims with clues in their
numbers; unlike most serial killers, he targets entire families.

Yet he manages to escape before his trial, and takes revenge on Karin’s
family. He leaves six dominoes on Karin’s lawn, not found until after he
slaughters her husband Jackson and three-year-old daughter, Cece,
writing, “See you next,” in the little girl’s blood.

Karin moves from her home in New Jersey to the more urban, Brooklyn, New
York, hoping to lose herself there. NYPD Detective Staples finds her
easily enough and tries to bring her into protective custody, reminding
her of her suicide attempt, causing dismissal from the police force on
disability. “I’ve dealt with that,” Karin answers. She knows that JPP
can find her and welcomes an end to her suffering. And JPP does find
her. And she doesn’t fight him . . . until her instincts to protect the
rest of her family kick in.

Karin’s home is under constant surveillance, still JPP slips by them.
Karin fights her way past him and heads for the roof, accidentally belly
shot by one of the police snipers—and The Domino Killer gets away, yet
again. But is he dead? No one knows as only one bullet shot was
recovered. Nor were his signature four dominoes found, which Karin had
seen on her table.

Writer Lief has a natural talent for bringing her readers into the
story, experiencing the pain, loss and love of her characters. She makes
one connect personally with the unemotional torture of the pathological
killer . . . the reader tends to feel the story rather than simply read
it.

Karin recovers and moves back to Brooklyn. No trace of the Domino Killer
remains, except in her mind. It’s not long before JPP contacts her on
her Skype webcam and gives her another clue. And so the cat and mouse
game between Karin and the deranged serial killer begins. Only Mac, her
ex-partner in New Jersey stays by her side, supporting her with his
quiet strength.

Author Lief is a bit lax with NYPD procedure protocol, but this will go
unnoticed by most readers. Together, but unknown to each other, they
catch JPP at his final game; one the Domino Killer had never thought to
lose. He’s in prison again. But can it hold him? Katia Lief doesn’t let
her readers relax for long as her story cascades down through more
suspense and games into a most satisfying ending.

Next Time You See Me, Lief’s second book in this series, finds Mac
and Karin married with a little boy, Ben; beginning a new life, putting
past horrors behind them. But not for long.

Mac’s parents are soon brutally murdered in their home. It’s Karin’s job
to tell Mac, bringing back memories of when her husband Jackson and
daughter, Cece, were murdered. Mac calls his brother Danny and sister
Rosie with the gruesome news. The crime scene Detective informs Mac that
his mother’s diamond ring is missing, but they have her severed finger.

Then Danny becomes a suspect when it’s learned that his often drunken
behavior has caused his parents to write him out of their will. Mac
believes that as messed up as his brother is, he is innocent—and intends
to prove it.

Suddenly Mac disappears. He never shows up for their second wedding
anniversary, and Karin is frantic. She calls everyone, including his
ex-wife, Val, who confirms that he isn’t there and asks Karin if “Mac’s
dark side has grabbed him yet,” puzzling Karin.

Detective Billy Staples stays by Karin’s side and tells her that an EZ
pass checkpoint shows Mac heading north of New York City. Two weeks
later, Billy tells her that the rental car Mac was driving was found in
waters off Long Island Sound. Karin won’t accept the obvious—that Mac
has drowned. Karin can feel him alive, until the police show her a brown
shoe and Karin collapses for the second time in her life.

Mac is found by Karin, living a complicated duplicity of lies, deceit,
and a past that has indeed caught up with him. Nothing is what it seems,
and friends turn into enemies as the pages of this book grind to a
shocking halt.

Author Katia Lief takes her readers on a whirlwind ride, overflowing
with mystery layered upon mystery, ending in an unusual but gratifying
finale. Readers will want to read more of this talented writer’s work.