Yossarian Slept Here: When Joseph Heller Was Dad, the Apthorp Was Home, and Life Was a Catch-22 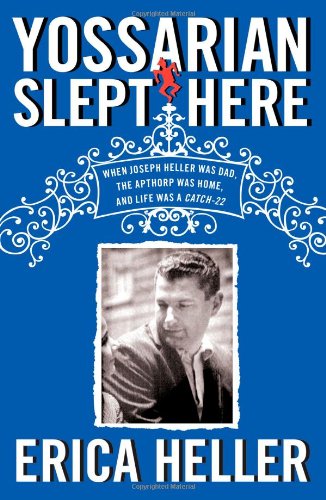 “. . . the image that emerges of Joseph Heller and his wife are seen very much through the filter of Erica Heller’s own life experience. . . . [she] has clearly inherited her way with words from her father, and her wry, sometimes mordant viewpoint as well.”

In the early pages of Yossarian Slept Here: When Joseph Heller Was Dad, the Apthorp Was Home and Life Was a Catch-22, author Erica Heller presents her readers with a lovely image of her parents, Catch-22 author Joseph Heller and his wife Shirley:

“When Catch was finally taking off, about a year after publication, my parents, who had now moved to a much larger, far grander apartment, would often jump into a cab late at night and ride around to the city’s leading bookstores in order to see the jaunty riot of red, white, and blue and the crooked little man—the covers of ‘the book,’ piled up in towers and pyramids, stacked in so many story windows. Was anything ever again as much fun, I wonder, for either of them? They would come home giddy and very late and go to sleep with their heads still full of the potent magic of a dream poised right on the cusp of becoming true.”

This passage gives good indication of the book’s contents, in which life’s moments, good and bad, are frozen in the amber of memory. And the reader is swept back to a New York City of the late 1950s, where Joseph Heller, in appropriate “Mad Men” style, is an advertising copywriter with aspirations of becoming a novelist. What lies ahead for him is listed in the subtitle: marriage, fatherhood, the Apthorp, and, of course, Catch-22, with the resounding success it brings.

But that subtitle also misleads, as it would have us believe that we will be given equal parts comprised of a family memoir, bits about Apthorp (happily, New York’s most strangely wonderful apartment building is treated as a main character here, with a full chapter dedicated to its history), and stories about the creation of Catch-22. This last part is, sadly, lacking.

Those wanting the full story of the nine years (We are told that nine years is the average amount of gestation time for a novel, which begs of question of just how old does that make Joyce Carol Oates, anyway?) that it took from Heller to move from his original draft (named Catch-18, making a name change necessary when Leon Uris’ Mila 18 was published in 1961, which then lead to a long search for just the right number for that particular “catch”) to the completion of his novel and its publication to mixed reviews.

While Heller’s agent, the flamboyant Candida Donadio, and his editor, the visionary Robert Gottlieb (who went on to edit John Cheever, Salman Rushdie, and Toni Morrison, among others), are given an all-too-brief spotlight in the memoir, Ms. Heller sadly chooses to describe the years in which her father labored (early mornings and late evenings, while still keeping his day job) from a child’s point of view. And so the most we learn of the experience is that, when the writing went well, both she and her brother were treated to ice cream.

Despite its title, Yossarian Slept Here (a rather ironic title, given that the author confesses in the pages of her own memoir that, despite knowing the name of her father’s protagonist, she has never read Catch-22 herself) is very much Erica Heller’s own story, one told here with equal portions candor, wit, and affection. But the image that emerges of Joseph Heller and his wife are seen very much through the filter of Erica Heller’s own life experience:

“It sometimes takes nearly an entire lifetime to realize what you have and have not inherited from your parents, especially if you haven’t been paying close or serious attention. To this day, for instance, just like my mother, the sound of a telephone ringing (or now, beeping) fills me with potent dread. I’m not positive, but she may well have muttered ‘un-oh’ every single time the phone rang during her entire lifetime, believing the telephone to be, primarily, an instrument created to deliver news of calamities and tragedies. From my father I inherited, as I only recently realized, the tendency to growl ‘no’ to pretty much any question put before me, automatically, thereby postponing my answer and guaranteeing sufficient time to properly contemplate and deliver my true response.”

Still, Yossarian is well worth reading for its World of Henry Orient viewpoint and for the world of New York City it creates—a place lovingly rendered on the page, complete with subway seats which woven seat covers that cut into your legs as you ride out to Coney Island, shrimp cocktails served at Italian joints, and ladies wearing hats and minks sitting lined up at the tables in Schrafft’s—as well as for the portrait she paints of her parents’ marriage. Erica Heller has clearly inherited her way with words from her father, and her wry, sometimes mordant viewpoint as well. From her mother, she seems, along with that telephone quirk, to have inherited her mensch’s heart and her love for literary genius, especially her father’s.

While Erica Heller chooses to reveal her father’s clay feet (as a father, he was a man who himself said that he didn’t “do children”), reporting that Heller was a poor father and a worse husband, a man whose continuing infidelities ultimately lead to the end of his marriage after more than 30 years (during their drawn-out divorce proceedings, Shirley Heller is quoted as saying, “He just wants people to think he’s a nice guy. He’s not a nice guy.”), she does so in the manner of a child mourning lost love, as here, in this brief exchange that took place on the day of her college graduation:

“Before we left for graduation, my father called me into his study to tell me that now that I was graduating, his work, as far as I was concerned, was done. ‘We can be friends from here on in, but any parenting obligations I had have been met,’ he announced with some mirth. ‘So it’s kind of my graduation, too,’ he informed me.”

Through the use of that word “mirth” she gives him a gentle out, and, as so many others agreed for so long, she allows that it is just another example of “the full Joe Heller treatment.”

As Ms. Heller sums it up: “This was Dad, funny yet not funny, humorous and diverting to witness, so long as the arrow wasn’t aimed in your direction.”

Oh, and as a special bonus, we are given, in the final pages of the book, Ms. Heller’s grandmother’s secret recipe for pot roast, which is very much appreciated, and which her then-divorced father once offered her $10,000 to reveal to him. That she chose to withhold the recipe from him out of loyalty to her mother says much about Ms. Heller.

Of the recipe, all that the reader can reveal is that buying first-cut brisket is the key—and that the secret ingredient is dill.