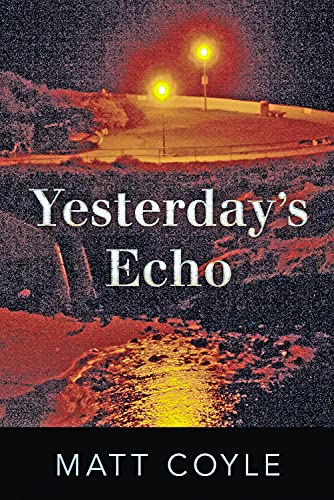 Ex-cop Rick Cahill was never convicted of his wife’s murder, but he was never exonerated either. Not by the police. Not by the media. Not even by himself.

Eight years later, police suspicion and guilt remain. Free from jail, but not from his past, Rick finds work back home as a silent partner in Muldoon’s Steak House. He’s also the waiter, bartender, and when need arises the plumber. It is while trying to unblock the toilet in the women’s bathroom he crosses paths with a woman—one he won’t forget in a hurry:

The ladies’ john was just outside the kitchen door, opposite the grill. A woman in a green baby doll dress stood outside it. Blonde, but not by birth. The gold around her neck and the diamond on her finger glowed like hard-won trophies. She looked to be holding off middle age with the help of a personal trainer and a plastic surgeon.

“Sorry about the inconvenience, ma’am.” I pointed to the busboy station ten feet away. “You can use the men’s restroom around that corner. I’ll have someone watch the door for you.”

The woman didn’t move. “You look familiar to me.”

“I’ve never been here before.” She peered up at me. It felt like she was staring into my past. “I think it was on TV. Have you ever been on TV?”

A familiar knot tightened my stomach.

This fateful encounter with the mysterious lady will have ramifications for Rick. The woman turns out to be Melody Malana, a beautiful yet secretive TV reporter who’s smart and sexy, but is hiding her own dark secrets.

When she is arrested for murder and asks Rick for help, the former cop says no—but the rest of him says yes. Haunted by his failure to protect his dead wife, he finally grasps at a chance for redemption as well as a chance to discover what he hopes will be love again.

As Rick goes on the prowl hoping to unearth something other than dirt, it’s not too long before he uncovers evidence that can either exonerate or condemn Melody. Unfortunately for Rick, no good deed goes unpunished.

Rick’s attempt to help Melody turns terribly wrong, and he becomes a suspect in the murder and the target of a police manhunt. On the run, it’s not too long before Rick encounters desperate people who’ll kill to keep their pasts buried. Before he can save himself and bring down a murderer, he must confront the truth about his own past and untangle his feelings for a woman he can seemingly never fully trust.

The warts-and-all Rick Cahill is a breath of fresh air and one of the most exciting protagonists to hit the pages of a novel in a long time. A cool, compulsively readable crime story from beginning to end.