The Year We Fell from Space 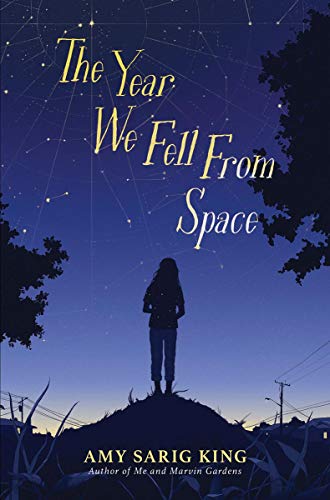 “I’m Liberty Johansen and I’m going to change the way people look at the night sky. I’m going to free them of old-constellation rules and teach them how to draw their own maps because the sky is trying to tell them something . . . only they don’t know it yet because I’m a sixth grader and nobody ever listens to sixth graders who say they’re going to do big things. But I’m an exception. We’re a family of exceptions.”

Lib and her sister Jilly are not completely surprised—or entirely regretful—when their parents tell them they are separating. Lib was unhappy with the yelling, the tension, her father’s obvious depression; perhaps this separation was what the family needed to get things back on track so they could be together again. Lib goes to her best friend—the night sky—and wishes on the stars for what she wants, but she doesn’t get answers. She gets a meteorite.

“It’s the answer to the wish I made on the star even though I didn’t ask specifically for any of this. Wishing on stars isn’t like making a birthday list. Even if you’re specific, the sky could send whatever it wants to help you because the sky is kinda mystical and old. It has different ideas about what we need.”

The meteorite becomes Lib’s friend, speaking in conversation with her—using Lib’s own thoughts. She needs a friend, since the ones she used to have at school have turned their backs on her. Liberty sees her mother’s sadness, her sister’s anger issues, and her father’s depression, and doesn’t know how to respond.

“I don’t know what aliens would think about humans if they came here. Humans are weird. We have some problems, I guess. I care more about stars than I care about humans anyway. Humans have been nothing but a pain in my butt so far. Which makes me more like Dad. And I’d be lying if I said that didn’t worry me.”

Liberty must navigate many hard issues—depression, broken friendships, her father’s new girlfriend, and feelings of abandonment and anger. Her mother and sister are constant strengths, and she finds different ways both to act out and to figure out this new world. How will it all resolve itself? How will she muddle through?

The Year We Fell from Space is a wonderful, thoughtful, and often sad book, written with hope and care. King touches on many aspects of both depression and a family breakup, with the feeling that there is help and there are ways to become whole again. Recommended for anyone—young or older—who is going through these kinds of issues or knows someone who is. Lovely and heartfelt.