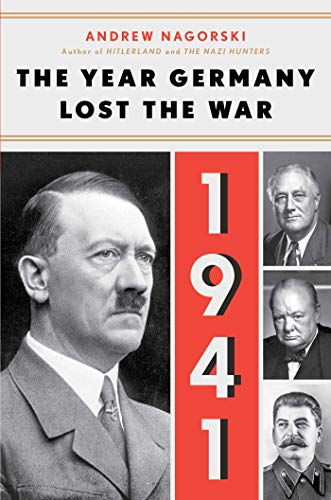 “Nagorski provides a compelling narrative of the war’s major events, developments, and personalities in 1941.”

Andrew Nagorski, the former Newsweek foreign correspondent and author of The Greatest Battle, a study of the World War II struggle for Moscow in 1941–early 1942, takes a broader approach in his new book The Year Germany Lost the War: 1941. Nagorski contends that Hitler’s ultimate defeat was the result of decisions made in 1941—that whole year was the war’s real turning point.

Nagorski provides a compelling narrative of the war’s major events, developments, and personalities in 1941. “What transpired in that critical year,” he writes, “set the trajectory that would lead to Nazi Germany’s ultimate destruction.” In 1941, to paraphrase the German writer Joachim Kapner, Germany attacked the whole world.

It was a stunning reversal of the global balance of power. Prior to June 1941, Germany ruled most of Europe and was adhering to its non-aggression pact with Soviet Russia. England, though it won the Battle of Britain over the skies of the English Channel, was suffering through the blitz at home and the U-boat menace at sea.

The inspired leadership of Winston Churchill and the courage and fighting ability of the Royal Navy and Royal Air Force had to that point enabled England to fight on. But England was alone. The United States was providing aid, but it was not yet ready to become a full belligerent.

By the end of 1941, Nagorski writes, the balance of forces had shifted decisively against Germany. Hitler now faced an alliance consisting of Britain and its empire, the Soviet Union, and the United States. Demographics, economics, and industrial power weighted the scales mightily against Germany. The end was fated.

Nagorski shows that Hitler brought this on himself and his country. It was a product of his arrogance and his worldview. Throughout the 1930s and in the early stages of the war, Hitler had succeeded both diplomatically and militarily by repeatedly overriding the cautious advice of his generals. When he waged war against Soviet Russia, that arrogance and worldview spelled Germany’s doom.

The decision to attack Russia (Operation Barbarossa) was his first and most important mistake. Stalin had been faithfully observing the terms of the Nazi-Soviet Pact. But Hitler’s worldview would not countenance peace with Russia. Nagorski notes that in Mein Kampf, Hitler wrote that Germany would find its “living space” (lebensraum) to the east. The German Fuhrer also viewed communism as a Jewish conspiracy and considered Jews and the Slavic peoples as subhuman.

Hitler’s racial ideology compounded the mistake of invading the Soviet Union. Had German troops invaded as liberators instead of conquerors, Stalin’s regime might have collapsed. Many Poles, Ukrainians, Cossacks, and others who had suffered terribly under Soviet rule, initially greeted the Germans as liberators, only to discover that the Germans were conducting a “war of annihilation,” as directed by their Fuhrer.

German troops, Nagorski writes, “killed and plundered at will.” “[T]he Wehrmacht,” he explained, “had prepared its men for the mission ahead by distributing pamphlets that combined denunciation of the commissars with anti-Semitic themes.”

Soviet soldiers who surrendered suffered horrible mistreatment by German troops, including starvation and murder. Nagorski notes that during 1941, over three million Soviet soldiers became POWs, and by February 1942, about two million of them were dead. “As word spread about German treatment of POWs,” Nagorski writes, “Red Army soldiers became increasingly determined to fight rather than surrender.”

As the German invasion stalled before Moscow and the Russian winter set in, Hitler refused to permit any defensive redeployment, in yet another instance of the Fuhrer’s arrogance overriding the prudent counsel of his generals. German troops and horses froze to death. Roads became impassible. Soviet troops under Marshal Georgy Zhukov counterattacked. Blitzkrieg had failed in the Soviet Union.

Hitler’s war against the Jews also hindered the German war effort by devoting increasingly scarce resources to the Final Solution. Nagorski contends that the decision to launch the Holocaust was made in 1941, prior to the infamous Wannsee Conference of January 20, 1942. He cites Yaron Pasher’s book Holocaust Versus Wehrmacht, which showed that during the fall and winter of 1941, 48 trains that could have supplied troops and critical supplies to the eastern front, instead transported Jews and Gypsies to death camps.

In the wake of the failure of Operation Barbarossa to quickly defeat the Soviet Union, Hitler made his final and fatal miscalculation by declaring war against the United States after the Japanese attack on Pearl Harbor. It is a decision that nearly 78 years later defies rational and logical explanation. Nagorski attributes this gross strategic error to Hitler’s belief that “[e]very escalation of the conflict was supposed to help him achieve the victory that always looked almost within his reach.”

Nagorski quotes Hitler’s propaganda chief Joseph Goebbels, who after learning about the Pearl Harbor attack remarked: “The United States will scarcely now be in a position to transport worthwhile material to England let alone the Soviet Union.” This comment reveals an astonishing ignorance of American industrial capabilities. The United States supplied “worthwhile material” to England and the Soviet Union, and eventually waged war on an unprecedented global scale.

Hitler’s declaration of war finally provided President Roosevelt with the political flexibility and legal basis to wage war against Germany, not just Japan. Although the U.S. war plan called for a Europe-first strategy, it is uncertain whether that plan could have been implemented absent Germany’s declaration of war.

While Hitler’s decisions in 1941 doomed Nazi Germany, they also led to a postwar world where many of those who suffered under Hitler’s rule found themselves under the equally harsh rule of Stalin and his henchmen in Eastern and Central Europe. “That, too,” writes Nagorski, “was a legacy of 1941.”