The Year of Blue Water (Yale Series of Younger Poets) 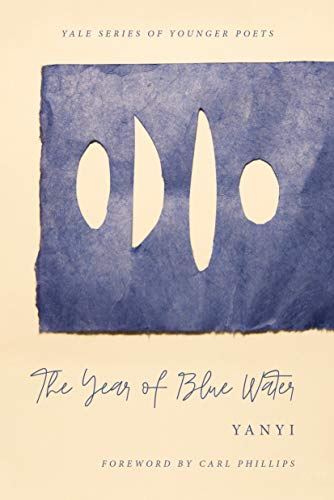 “priceless . . . In times when sexual minorities and immigrants are under social and political assault, a poetry book by an immigrant trans, published at a prestigious university that has been a citadel of mainstreamism, is embracing the outcast.”

Since 1919, Yale University Press has been awarding an annual literary award to a U.S. poet who has not previously published a poetry book. Yanyi, a Chinese immigrant, won the award in 2018 and his book, The Year of Blue Water, is published in the Yale Series of Younger Poets.

Yanyi writes poetry from the existential fusion of several identities. “No one has my name or knows how to pronounce it.” In addition to being a Chinese and an immigrant, Yanyi is a trans who at high school lunches “pretended that my body didn’t want food” and “I was a girl at the time.”

The experiences that Yanyi captures in his poetry sensitizes the readers’ understanding of the trans community still striving to claim respect and dignity. Writing is an act of community solidarity. “For the reasons that I write, I cannot write alone.” However, Yanyi is not an activist poet protesting prejudice that the trans community endures. His lines carry no rage, no militancy, no complaining. Trans poems have no social agenda.

Instead, the trans poems engage in polite meditation, hesitant self-reflection. They are murmurs gently shared with a willing audience. “For a long time, I was attached to she/her as my pronouns.” “When I was a woman, I didn’t feel the same as them, or they to me.” “I never want to disappear unequivocally into masculinity.” These states of mind lay bare a “gender-ambiguous person resting in a blue sea.”

Some Yanyi poems ruminate over the physical body. “Anxiety lives in my upper throat and crying lives in my lower throat.” “In a dual body, there is no room for both of you.” “There are places I can’t go, like outside my body.” “The worst thing about being trans isn’t hating my body; it’s not having many feelings about it at all.” These ruminations are far from specific to a trans body. They may trigger how the readers of any gender mull over their own body.

The friends, the therapist, and the mother show up in several Yanyi poems. The friend poems cover a wide range of emotions and events. Some “my friends” poems share muted views about being Chinese. “The time difference to China” is “thirteen hours.” Friends “go through my baby photos.” There is one: “small hands holding a chop stick, the rice bowl in between.” “‘The other kids made fun of our house.’ Doreen says of her American friends.”

The therapist poems bare a mind tormented with anxieties and fears. Fragility lurks below lines “filled with tears with no need to shed them.” “I tell my therapist that my anxiety made solitude unbearable.” “My therapist tells me that I need to work on holding onto myself.” “To be alone is to face not one fear but multiple fears.” “I had an anxiety attack in public recently.” Events accumulate and there is only so much one can hold in the throat. There are moments when “Crying is more like release.”

The mother poems are most conflicted and unresolved. “She tells me she feels guilty for giving birth to me.” “I’ve killed the image of her daughter.” “I try to tell her that she should see the doctor, try and take care of herself.” “I felt like I failed at loving her.” “I tell her she must feel so much pain, that I understand what she’s going through. Then I hang up.”

Then, there are dream poems. Poetry is dreaming. Poetry is also dreaming within dreaming and that’s what Yanyi does—a fair bit. But what ghosts may come perchance in dreams puzzles the outcomes.

“In my dreams, my parents almost always die, or I do.” “In the dream, when you talk, the butterflies are orange, and then blue. . .” “In a dream, I called the police at least two times, maybe three . . .” “In your dreams, you see one person again and again.” “Last night, I had a dream about giving a speech on art.”

One of the most powerful poems in the book is the one about being an alien, a foreigner—a poem that all immigrants, legal and illegal, permanent resident and naturalized citizen, can relate to as the poem captures the truth of living in somebody else’s land. Most Yanyi poems have no title, and this one too has no title, but its missing title is more telling than other poems. Always something is missing in being a foreigner, even more so when a nation treats foreigners as “aliens,” a word deeply etched in the U.S. law tablets.

The poem begins with “We didn’t have cable.” Cable is tangible; it is not the esoteric Wi-Fi. Cable is connectivity through actual wires. “All we did as aliens, we did because at some point, it is easier to be lonely than to continue working.” Living in a foreign country, even if paradise, is “to be a guest in all houses, to not know manners, to not have a past.” The poem ends with a staggering awareness that all immigrants carry in their hearts: “Every day we are so rootless, we had to make the same friends over and over again.”

Yanyi does not choose to write in conventional meter or free verse. He writes prose poetry. While conventional prose fills the entire page, page after page, prose poetry occupies only the middle of the page, leaving enough empty space for the reader’s imagination to wander in awe, dread, wonderment, with soft and hard feelings. The rhyming words and the music of metered poetry is missing in prose poetry, and yet poetic insights persist with charm and sophistication. “I needed to catch the rhythm as it happened to me” is Yanyi’s perspicuity of prose poetry.

The Year of Blue Water is a priceless addition to the Yale Series. In times when sexual minorities and immigrants are under social and political assault, a poetry book by an immigrant trans, published at a prestigious university that has been a citadel of mainstreamism, is embracing the outcast. The book also contributes to transnational poetry sculpted in English all over the world.