The XX Factor: How the Rise of Working Women Has Created a Far Less Equal World 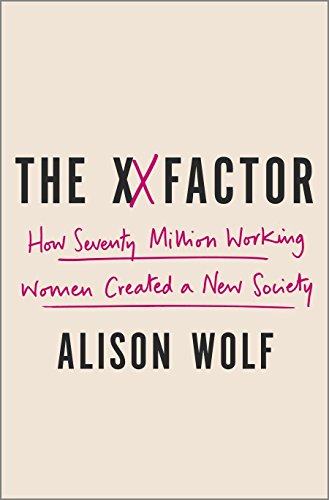 In the introduction to her book The XX Factor: How the Rise of Working Women Has Created a Far Less Equal World Alison Wolf states that “until now all women’s lives, whether rich or poor, have been dominated by the same experiences and pressures.”

Today, elite and highly educated women have become a class apart. But these professionals, businesswomen, and holders of advanced degrees have not moved farther apart from men. On the contrary, they are now more like the men of the family than ever before in history. It is from other women that they have drawn away.

She argues that whereas previously the lives of all women had been very similar with motherhood and childbearing as the center of their world, the transformation of the labor market primarily related to advances in education for women, and the arrival of the Pill transformed “elite” women’s lives.

While education and advances in reproductive technology have been life-changing for women and men, more attention could have been paid by Ms. Wolf to political and legal influences on women’s labor market choices.

It is interesting also that Ms. Wolf uses the term “elite” throughout the book with approbation and without any sense of irony. Elite women are those who have benefited from conventional elite education and have gone on to thrive in a world previously dominated by men. It seems not too surprising then that they have “not moved apart from men” given that they have such similar trajectories.

Ms. Wolf draws upon a range of already published material and widely used datasets in the public domain with the exception of one chapter on sexual behavior. Much of the data that she uses is however quite dated. For example she relies heavily upon ILO datasets of 1997 even though there is much more recent data available from the UN, the World Bank, and elsewhere.

She does however enliven these sets of data by interviews with a number of apparently rather elite colleagues and acquaintances (“elegant, tiny, highflying Kathy Matsui at a conference in Bangladesh, multitasking on her BlackBerry and midway between meetings in Milan and her home in Tokyo” is a case in point); and makes a number of literary and topical references.

In her chapter The Rich Get Rich and the Poor Get Children she states that “the rich have fewer children than their contemporaries, and many will have no children at all.”

While this belief still has popular currency more recent data show that in many countries, including the UK, the better off are having larger families, and as she states in her conclusion dedicate enormous amounts of money and time to “ all their children.” This is of course made possible by what Ms. Wolf terms “the return of the servant classes.” This means in effect that the relationship between women at the top and the “lower echelons” of society is more or less the same as it was in previous centuries when there was no elite of working women in the labor force.

In her chapter Sex and the Single Graduate Ms. Wolf maintains that despite the much vaunted liberation of women the world retains some old taboos in particular the exchange of sex for money.

In her concluding chapter Ms. Wolf states that all women feel that being a woman is central to their identity “the reason must, surely, be children” which seems to counter her basic argument.

There is little evidence to show even from the texts that Ms. Wolf is very fond of quoting (for example the works of Jane Austen) that elite women however defined and working women as normally defined ever made common cause other than as mistress and servant.

In fact it is usually assumed that women of any class who are dependent upon fathers, husbands, brothers, or mentors for their fortunes usually support men rather than women.

Thus the following quotation does not support Ms. Wolf’s basic thesis but is rather a demonstration that not much has changed: “Hillary Clinton’s defeat by Barack Obama was a defining moment in the story of today’s successful women. Not because a woman could well have taken the US presidential nomination but, on the contrary because what ultimately decided those primaries where the votes of a certain sort of woman. And those women didn’t think that the candidate’s gender mattered.”

As Ms. Wolf must be aware even from the outset the women’s movement itself has been characterized by lack of unity and by the kind of elitism that Wolf so eloquently describes.

As is true so often in life more could have been achieved had less been attempted. Her efforts to draw together so many threads over such a broad canvas inevitably lead to discontinuities and contradictions.

Despite some glancing references to Chinese millionaires Ms. Wolf is primarily concerned with elite women in Northern Europe and the States. And she should not have tried to extend her thesis beyond this. Her elite women have been successful primarily through their education in scaling male-defined pyramids.

What is not mentioned is that one of the joys of the labor market today is the number of alternative pyramids available to both men and women due in no small measure to the Internet and the fact that elite education is not the only route to success.

Overall while this is an interesting and provocative analysis Ms. Wolf tends to overemphasize the previous sisterly solidarity for which there is little evidence and portrays the current sisterly differences too starkly, perhaps envisaging that there is only one possible model of female success.