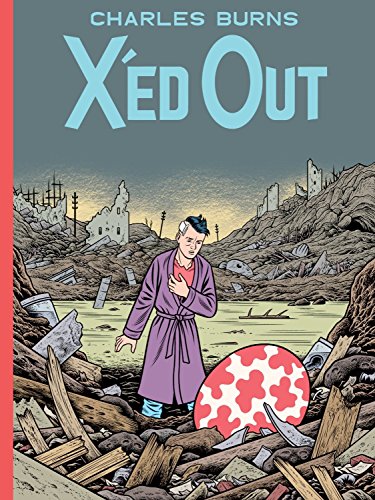 In X’ed Out, artist and writer Charles Burns returns to many of the themes and images that made his magnum opus, Black Hole, both a pleasure and a challenge to read. As with Black Hole, Burns, who has been writing and drawing underground comics since the 1980s, plumbs the inky depths of the teen psyche while exploring the sticky relationship between innocence and experience. Along the way, he also indulges his penchant for all things wiggly, as tongues, worms, tails, and homunculi of all shapes and sizes make appearances on nearly every page.

The narrative focuses on Doug, a wannabe poet working in the long shadow of William S. Burroughs. Awoken one night by his dead cat, Doug follows the animal through a hole in the wall to a world inhabited by angry salamanders, street vendors with rotting faces, and the cyclopean proprietors of the strangest omelet-stand in all of literature. Drifting in and out of this dream world, Doug recalls the string of events leading up to the head trauma that likely produced it: a botched poetry reading, a breakup with the “good girl” of his waning high school days, and a budding romance with an arty “bad girl,” among other things.

Throughout the volume, the first in what promises to be a mind-bending series, Burns interlaces dreams and reality with the expert touch of a practiced magician. In his dreams, Doug takes on a childlike simplicity, an echo of the European children’s favorite, Tintin. In the waking world, however, Doug’s features take on a darker, more detailed and complicated mien. Meanwhile, the problems of both worlds bleed into each other as an apparent addiction to painkillers prevents the beleaguered protagonist from fully reconstructing his past.

In terms of story, the figure of the angry young man who goes off in search of himself is nothing new. Burns’s Doug, however, is no Holden Caulfield. His twisted imagination alone is enough to separate him from the rest of the pack. Moreover, his palpable fear of the world beyond his dreams renders him sympathetic even as his vanity—embodied by, among other things, a near obsession with snapping Polaroid self-portraits—brings out the worst of his adolescent ego.

Artistically, Burns is at his visual best when depicting the disturbing minutiae of Doug’s life, like impossible lengths of cigarette ash, the zits on the face of a teenage punk, and a razorblade drawn down the length of a forearm. At the same time, Burns is equally comfortable wielding the signifying power of the blank frame to represent mental spaces where memory fails and the conscious mind refuses to go. The cumulative effect is to reveal a world behind the world, to take the reader down the rabbit hole of the teenage unconscious, and to turn the quotidian inside out.

Disturbing as it is intriguing, X’ed Out is a showcase of all that glitters in the weird and wonderful mind of its creator. It’s also a somber meditation on the ugly business of growing up. In a phrase, it’s Tintin meets David Lynch, which is also to say that X’ed Out captures the exquisite agony of struggling toward adulthood like no other novel of the post-punk era, graphic or otherwise