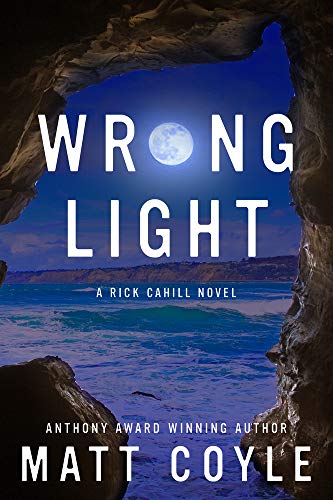 Bestselling and award-winning writer Matt Coyle’s Private Investigator Rick Cahill is back with a vengeance in this latest tome, Wrong Light, the fifth book in the award-winning series.

Naomi Hendrix is on the verge of radio stardom with her five nightly shows on 1350 Heart of San Diego. Headhunters from other radio stations are zooming in on her, wanting to add her sultry voice and incisive intellect to their own radio list. Listeners’ numbers have been rising as steadily as the San Diego heat. Management at the station are under tremendous pressure to keep their golden goose at the station, and are negotiating a new contract with Naomi. However . . .

Naomi’s sexy voice hovering over the radio waves isn’t the only thing haunting the nights. A demented fan steeped in Greek myths is stalking her, hiding in the shadows, waiting for the right moment to abduct her and fulfil a twisted fantasy.

Fortunately for Naomi, she has one true fan who will do his damndest to prevent any harm coming to her. For years, private investigator Rick Cahill has been a loyal listener of her show, especially during his lonely nights of stakeouts behind alleyways and avenues. The station hires Rick to not only protect Naomi, but also track down the stalker. Not an easy task considering the many people listening to the show.

However, Rick’s initial impression of the radio station’s security leaves a lot to be desired:

“The parking lot had no gate, no guard, no security cameras that I could see. Anyone could drive in.”

He didn’t know if he should laugh or cry. Is this how they protect someone under threat of being abducted?

“Any five-night-a-week lonely listener who was convinced that he and Naomi were destined to spend eternity together had only to wait outside until his afterlife wife finished her show and walked out to her car. Even if somebody escorted Naomi through the parking lot, they’d be no match for a crazy with a gun in his hand and twisted love in his heart.”

Soon into his investigation, Rick discovers that Naomi is not everything she seems, and is harboring a terrible secret from her past; a secret that could possibly be the key to the whole investigation and unmasked the stalker. More troubling, perhaps the stalker is someone close to Naomi, someone at the very station itself.

However, before Rick can extract the truth from Naomi, about her past, he is thrust into a missing person’s case—an abduction he may have unwittingly caused. While Rick pursues Naomi’s stalker and battles the police, evil ricochets from his own past and embroils Rick in a race to find the truth about an old nemesis. Soon, it’s not Naomi’s past he needs to worry about, but his own.

Still haunted by the murder of his wife, Colleen—of which he was the prime suspect—Rick knows there are people out there who believe he’s capable of murder. Despite being found innocent of the crime, he lost his job as a cop. But was he involved in other murders, if not his wife’s?

And just when he thinks he has enough to worry about, he gets a phone call that ices his stomach. It’s from Sergei Volkov, head of the Russian Mafia in San Diego. Sergei never calls unless it is life-threatening, in more ways than one.

“Now it is time to live up to our agreement. You must meet with Tatiana tomorrow. She will give you instructions.”

Tatiana. His daughter. We hadn’t met under friendly circumstances the first time. And we left under even unfriendlier ones. I had no way out. I could only hope the Russian would be true to his word. And that paying my debt wouldn’t involve robbing a bank or beating somebody up.

A complex character, Rick Cahill is a refreshingly original PI with a dark past who will not hesitate to take the law into his own hands, if need be. Wrong Light is compulsive storytelling, intelligently scripted, and filled with twists and turns you never see coming. The best in the series so far and not to be missed.