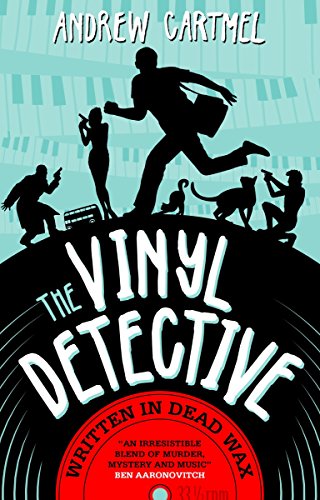 Author Cartmel has combined the tropes of the several genres into a surprising, refreshing story centered around old-fashioned records—the “vinyl” of title. And the “detective” part pertains to the hero’s occupation of hunting down rare LPs, to satisfy his both own passion and the desires of occasionally well-paying collectors.

The story is a strange amalgam of hardboiled detective (never named, akin to Bill Pronzini’s Nameless Detective series), lured into trouble by a beautiful, mysterious woman; and cozy mystery (amateur sleuth with a special skill and interest, who lives alone with cats), spiced with chick lit (sassy modern voice, only in male).

Oh yes, there’s also the thriller element, with layer after layer of complexity and threat and abrupt turnabouts. Each time you think the story is over, it isn’t—there’s a big twist, and then another twist, until you start feeling like “someone had taken my brain out of my head, used it as the ball in a vigorous round of Alice in Wonderland croquet, and replaced it.”

Also thriller-like, the action moves between countries while the hero chases villains and villains chase the hero, following clues and dodging danger. What makes the combination work is the author’s connoisseurship of vintage vinyl. (And charming, realistic presentation of cats.) He uses this entertaining narrative to sweep us into the arcane world of art and value, unknown to most but inhabited by people just as quirky and powerful and obsessive about music as they can be about paintings, antiques, rare books, and the like.

All that said, there’s still a tedium factor. Readers used to shorter books with simpler plots may get impatient for the resolution. And some women may get weary of, or even offended by, the cliché male reactions to female appearance. There’s a definite undertone of adolescent male fantasy from start to finish. If that’s what you’re looking for, then this novel is a winner.

In contrast, the book’s vocabulary is unusually erudite. How often do you come across exegesis, onanism, anodyne, vouchsafe, opprobrium, et al., tossed off in an adventure novel? Such terms are counterbalanced by short and snappy scenes and dialogue. There’s humor, as well, which falls just short of trying too hard, so it usually succeeds. Thus the story delivers multiple chuckles per chapter.

Written in Dead Wax is the first of at least three books slated for The Vinyl Detective series. Based on this volume, the series will be a hit.