Writing to Persuade: How to Bring People Over to Your Side 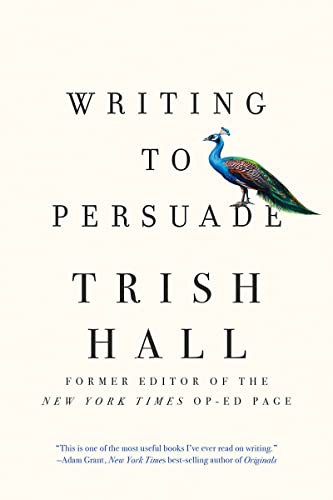 “Writing to Persuade provides solid instruction. The lessons learned over the course of Hall’s decades-long career are sound guidance to any writer, be it the fledgling journalist thrashing at a keyboard or the hardened veteran looking for a good refresher.”

Trish Hall knows a good argument when she sees one. It’s not the petty slash and burn screeds that are a standard of cable television news/opinion shows or blogs with agendas to hawk. Hall is more in line with the definition Michael Palin gives in the Monty Python sketch “Argument Clinic”: “An argument is a connected series of statements intended to establish a proposition.” Good arguments are more than “yes it is/no it isn’t.”

In her new book Writing to Persuade Hall shares the invaluable lessons she learned over her many years working as writer and editor for some of the most prestigious news organizations in the country, culminating in her job as overseeing editor for The New York Times op-ed section.

The book is equal parts memoir and writing guide as Hall lays out the fundamentals of thoughtful persuasion vital to the written pas de deux between writer and reader. Be it an essay for the Times editorial page, an office memo, or a post on a website comment section, the basic constructs are the same.

Hall anchors the book on 15 essential points of good persuasive writing. First on the list is a lost skill in today’s world of instantaneous gratification: listen to people. “Despite our culture of selfies, persuasion is not about you; it’s about them,” Hall writes. An important and much overlooked point of order in the age of tweetstorms and internet trolling.

Hall enlarges her advice with sidebars that drill down deeper into the concepts. Often she uses examples of how she helped non-writers with something to say to in developing their unique voices on the page. Writing to persuade isn’t just a matter of throwing down words and expecting the reader to follow. It just doesn’t work. One chapter title illustrates exactly what a writer must do to keep the reader engaged: “Focus. Be Specific. Prune. And Kill the Jargon.” It’s a fresh take on the best rules of that old standby The Elements of Style. Omit unnecessary words and be clear.

“We all cling to our ideas and beliefs, which makes it tough to change opinions,” Hall writes. But a good writer can break down that barrier through simple rules of courtesy. Be polite. Consider with the reader and empathize with them. Be gentle and present viewpoints without bombast and self-righteousness. Above all tell a story. "Through story, we learn lessons about how to deal with our own lives. All of us have suffered or felt confused. If you start by telling stories that get people engaged, then you can later talk about larger issues and solutions,” Hall says.

Interlaced within the practical advice is Hall's own story, a rich memoir used to illustrate the book’s principles. Hall fondly remembers her childhood in a small Pennsylvania town where she first fell in love with the power of the written word through endless visits to the public library. But her rise from college student to stringer for the Associated Press and eventually her powerful position at The New York Times is no breathtaking Brenda Starr “girl reporter makes good” yarn. Early in her career, while working as a copy editor in New Haven, Hall routinely worked late. “One night I headed to the elevator with an older male editor. We got in. The doors closed. He looked at me and grinned and said, ‘I could rape you right now.’ I could see his eyes crinkling with laughter behind his glasses.”

Hall called out this “humor” for what it was. Long before #MeToo she pushed back against the old boys club newsroom culture where rape was one big joke. She and other women in the business organized to fight the workplace sexism and harassment, as well as salary inequality where male journalists were paid 20 percent more than their female counterparts. The power of this story amplifies what Writing to Persuade is all about.

There are plenty of writing “how to” books. Some are very good; others provide simplistic Pollyanna advice. Writing to Persuade provides solid instruction. The lessons learned over the course of Hall’s decades-long career are sound guidance to any writer, be it the fledgling journalist thrashing at a keyboard or the hardened veteran looking for a good refresher.