The Writing of the Gods: The Race to Decode the Rosetta Stone 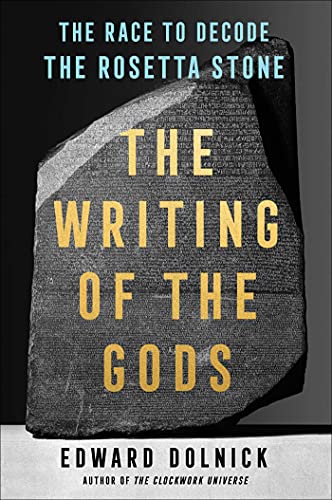 The human animal loves puzzles, and it’s all the more enticing if it’s a puzzle that others can’t solve. He or she who first posed a question that takes centuries to answer will seem like a kind of wizard; to discover or recover a solution is to honor ingenuity, and there can be great excitement in the breaking of a code. No code in human history has been more celebrated or difficult to translate than that of hieroglyphics—or, more properly, the hieroglyph—and no object in our history is a greater source of fascination than the Rosetta Stone.

It sits now in honored splendor in the British Museum, by far the most visited item in that vast collection: a gift-shop favorite in replica or postcard. But it was found, almost by accident, in Egypt in 1799. When the Rosetta Stone itself—a granodiorite stele found by French soldiers in the Egyptian desert—was brought back to Europe and finally deciphered we learned much. The decree had been recorded in three languages and inscribed in 196 BCE in the reign of King Ptolemy V. It proclaimed the king’s divinity and the excellent accomplishments of his so-far reign; it was intended to be understood by all of the king’s subjects and therefore was composed in three very different languages.

The first of these was hieroglyphic and (to the 18th century reader) entirely opaque; the second was demotic Greek, or Coptic, which had been the language spoken by the priests and people of the region; the third was classic Greek. A French scholar, Jean Francois Champollion—who knew Greek and had embarked on the study of Coptic—was able by comparing them to see they declared the same thing. Under the assumption that the third set of seemingly incomprehensible symbols was repeating the repeated text, he could at last decode it in 1822.

This was no mean feat. As Edward Dolnick puts it, in his charming Prologue to The Writing of the Gods,” we should “Imagine an archaeologist, thousands of years from now, whose trowel clangs against something sold and hard, hidden in the dirt. . . . Over weeks and months, teams of researchers painstakingly trace the carved and eroded marks . . . Some are too damaged or worn to make out, and others are missing altogether . . . OURSCEANSEV . . . (Some scholars believe the message should be read the other way around:…VESNAECSRUO…)

“How would the sleuths proceed? Not knowing English, not knowing American history, would they ever manage to see that once a stone temple had proclaimed a message that began, ‘Four score and seven years ago?’”

And so it was with Champollion and the Rosetta Stone. Think of the moment the multilingual scholar knew what he was looking at and first understood—or began to grasp—a way to decipher the text. It had been more than 20 years since Napoleon’s expedition to Egypt had brought back the recovered object, more than 2,000 years since the scribe or scribes incised it with Ptolemy’s decree. From that moment of discovery and comparative analysis the history of Egypt and its written discourse opened out like a closed flower or a folded fan. Through an illustrative set of marks, it told the reader-scholar more than s/he otherwise could comprehend about the vanished past.

In The Writing of the Gods, Edward Dolnick tells a complicated tale. As its subtitle suggests, his inquiry concerns “The Race to Decode the Rosetta Stone.” And a full-fledged race (though lasting more than 20 years) it was.

The two principal competitors were a brash impoverished Frenchman and a modest polyglot Englishman, Thomas Young. “Thomas Young was one of the most versatile thinkers who ever lived, eager to tackle any challenge from any direction. Jean-Francois Champollion was utterly single-minded, unwilling to focus his gaze on any topic but Egypt.” As Dolnick puts it, “What Thomas Young could do was get things started, by showing that for centuries everyone had approached hieroglyphs in a way that was all wrong. . . . But a genius for solving puzzles wasn’t enough. What you needed as well was a knowledge of Coptic and Egyptian history that ran so deep that intuition and experiment could take you beyond the limits of logic. That was Champollion’s role, and no one else could have played it.”

Young was wealthy, Champollion poor. Young was wide-ranging and, in the best sense of the term, a dilettante, Champollion a scholar of unwavering intensity. The story of their competition—and the discoveries made by others—takes too long here to tell. But Dolnick (whose other books include The Clockwork Universe, The Forger’s Spell, and The Rescue Artist) does a first-rate job of storytelling; his scenes are vivid and his cast of characters wide-ranging. Too, he writes with wit: “Tut was a nobody, the Millard Fillmore of pharaohs, and yet the riches buried with him dazzle museumgoers to this day.” Or, “The cliché has it that an unknown subject is a closed book, but Egypt was different. Egypt was an open book, with illustrations on every page, that no one knew how to read.”

Further, “Champollion and his fellow decipherers had Coptic to help them, but the long transformation of Egyptian into Coptic created countless opportunities for trouble. The most common was to mistake words that looked alike for words that truly were alike. Students and tourists all know the risk. Pies in Spanish is feet, not pastries. Blessé in French is wounded, not blessed. Pain is not hurt and suffering but bread.”

A goodly portion of this work instructs us in the art of reading—or, more properly, deciphering the signs and signifiers of the lost Egyptian alphabet. We take small side trips to decoding Linear B and cuneiform, the Zodiac cipher ,and the Nazi Enigma machine. But the bulk of this inquiry takes us through a tortious process of deduction, the way to see a cartouche representing Ptolemy or Cleopatra or the female pharaoh Hatshepaut. It’s a heady business: full of pitfalls, pratfalls, wrong turnings, and dead ends. As Dolnick puts it, writing of the hieroglyph, “We can imagine future generations equally oblivious to symbols that we take for granted. Will archaeologists centuries from now grasp that a lightbulb over a person’s head once meant Eureka?”