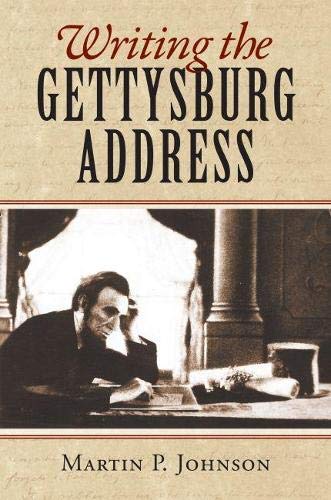 “This is a fascinating journey through one of the most important speeches in American and world history. It is a superb treatise for those interested in the history of the Civil War and the battle of Gettysburg and an excellent example of research for those who take public speaking as their profession or avocation.”

We all know the words. It is one of the greatest speeches of all time and perhaps the greatest eulogy ever given. It is also a speech surrounded with mythology and legends in the modern era, as well as one of the most controversial and misquoted.

Martin Johnson brings the perspective of the Gettysburg Address into focus for those who are interested in the history and mythology of this great speech. He explores the tales of the speech and declares which version of the presentation was, in fact, given on the platform on that fateful November afternoon.

There are five copies of the Address in President Lincoln’s hand: Nicolay, Hay, Everett, Bancroft, and Bliss, and as many newspaper transcriptions, no two alike. Johnson declares early in this dissertation that it was the Nicolay version, sometimes called the Washington/Penciled version that was given that Indian summer day and spends the remainder of his book not only justifying his position, but demystifying the myths of the speech itself.

“Lincoln’s own story of how he wrote the Gettysburg Address, and the words of the speech themselves, cannot be fully comprehended without a clear chronology of composition and succession of manuscripts and word . . . The texts tells, but we can only see their history through the sources available to us, refracted by time and distorted by the lens of myth and memory.”

The story begins on November 7 when the president is invited to Gettysburg to say a “few words” at the ceremony commemorating the new Soldier’s Cemetery outside of this small Pennsylvania town. We are taken through the president’s decision process to finally accept the invitation on November 12 or 13 and the process the president took in writing those immortal words.

Johnson goes to great lengths to disprove the notion that the Gettysburg Address was written on the train from Washington to the battlefield. He is able to chronicle the entire trip, including the trip of the governors’ train to show that Lincoln just did not have the time to write the complete address. We follow the myth from its origins to the insertion into our school books.

In fact, the first paragraph was written in its final stage in the White House, bringing it with him as Lincoln prepared the second half of his presentation. Lincoln most likely finished the address sometime on the morning of the ceremony, November 19, 1863. Again Johnson take great pains to show that the original inked paper was read and the revisions on the second page were as noted by Hay and Nicolay.

It is the last section of this treatise that is most intriguing. Johnson takes the time to do a line by line comparison of up to 18 different versions all thought to be the speech Lincoln gave at Gettysburg.  To answer the question of whether “under God” was used in the actual speech, Johnson compares one-dozen versions of the Address.  If his premise is correct, and there is no reason to nullify his position, then it was the Nicolay version not containing the reference to God given.

Even then Johnson shows that “under God” appears in nine of the versions and is found in different positions within those. Lincoln did insert, however, “under God” in three of the five versions in his hand, given to Everett, Bancroft and Bliss. Johnson spends a fair amount of time discussing the possible and plausible reasons for this addition.

This is a fascinating journey through one of the most important speeches in American and world history. It is a superb treatise for those interested in the history of the Civil War and the battle of Gettysburg and an excellent example of research for those who take public speaking as their profession or avocation.