The Writer's Crusade: Kurt Vonnegut and the Many Lives of Slaughterhouse-Five (Books About Books) 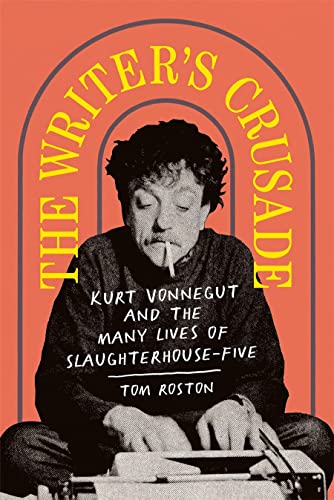 “The Writer’s Crusade is an important consideration of Kurt Vonnegut and the legacy of Slaughterhouse-Five.”

"I have told my sons that they are not under any circumstances to take part in massacres, and that the news of massacres of enemies is not to fill then with satisfaction or glee,” Kurt Vonnegut wrote in Chapter One, the introduction to his greatest novel Slaughterhouse-Five, or The Children’s Crusade: A Duty Dance with Death. Vonnegut was a veteran of WWII combat, was captured at the Battle of the Bulge, and held as a POW by the Nazis beneath the town Dresden, a in a makeshift underground prison carved out of empty butchers’ slaughterhouses.

Slaughterhouse-Five was hailed upon its publication in 1969 as a powerful anti-war novel, one written by an outspoken opponent of the American involvement Vietnam. And yet, despite his very public stance on pacifism, Vonnegut and fellow POW Bernard V. O’Hare came damn near close to pummeling a Nazi guard to death.

Or not. Most likely this was a cock-and-bull story told in a bar to a Vietnam veteran by a very inebriated Vonnegut and a less inebriated O’Hare. Both Vonnegut's children and O’Hare’s son dismiss this story as the braggadocio of two old soldiers, as does Tom Roston, author of The Writer's Crusade: Kurt Vonnegut and the Many Lives of Slaughterhouse-Five. Still, it makes for a great yarn. At one point, Roston gave his book the working title Kurt Vonnegut: Nazi Slayer!

The Writer's Crusade is a multifaceted look at one of the great modern novels. It’s part history of how the book came to be, part Vonnegut biography, and a thoughtful consideration of the book’s impact on America’s post-WWII combat vets. Roston was given complete access to the many hundreds of pages that went into the drafting of Slaughterhouse-Five, a voluminous archive of typewritten manuscripts, handwritten notes, and other materials that are now held at the Lilly Library of Indiana University in Bloomington.

Vonnegut was a 22-year-old POW in February 1945 when Dresden was firebombed by the Allies. It was a show of force with a message: This is what could happen to the rest of the country if Germany continued fighting. Vonnegut was one of the many POWs ordered to clean up the devastation of a once-beautiful city that now looked like “the surface of the moon,” as the novelist wrote. Official figures put the numbers of civilians killed in the two-day bombing at 22,500 to 25,000. The raid was largely forgotten by history books but remained indelible in Vonnegut’s mind.

As Vonnegut transformed from post-war college student to public relations writer for GE to author “Kurt Vonnegut,” he wrestled with his memories. He sold short stories and a few novels, but throughout the course of 23 years Vonnegut was obsessed with creating a great novel about the Dresden firebombing. He played with ideas and characters, discarded and added scenes, drew on old letters and memories of friends, and blasted his way through writer's block.

Three great novels had been written by men who served during WWII, and they were all big books: Joseph Heller’s Catch-22 (453 pages), Norman Mailer’s The Naked and the Dead (721 pages), and James Jones' epic From Here to Eternity (861 pages). These were great war novels, each with a unique point of view but all written from a realistic perspective of soldiers and generals engaged in bloody combat. What emerged from Vonnegut’s imagination was something wholly other: a stream of consciousness story about a veteran with a war-damaged psyche. Billy Pilgrim, the main character, stumbles his way through war, domestic tranquility, time travel, and life on the distance planet Tralfamadore where he is exhibited in a zoo by space aliens who resembled toilet plungers.

Vonnegut’s novel was smaller when compared to the books of his peers, coming in at just 215 pages. Yet Vonnegut accomplished something that Mailer, Jones, and even Heller’s dark satire could not. Slaughterhouse-Five takes a long-range view of the war’s afterlife. Billy Pilgrim suffers quietly from what he has seen. He lives in a world where reality and surrealism co-exist in a shattered mind. What’s more, Roston argues, Billy Pilgrim is the creation of a war vet struggling with his own PTSD. In doing so, Vonnegut speaks to generations of soldiers fighting their own inner post-war battles.

That’s a distinctly modern take on Vonnegut’s book, an idea Roston backs up in interviews with veterans of more recent combats. One man, Matthew Mellina, who served in Iraq, sees much of himself in Billy Pilgrim. As Roston quotes Mellina: “We are very similar,” he says of Billy Pilgrim. “I was so out of my element. I had no clue what I was doing. He’s me. I was always felt out of place, especially with the men I served. It was always weird. I am more comfortable in my skin when I am reading something like Slaughterhouse.”

Other voices backing up Roston’s thesis include Tim O’Brien, Vietnam veteran and author of The Things They Carried; and Dr. Robert Jay Lifton, a pioneer in studying the psychological repercussions of war. Lifton relates that he once received an unexpected phone call from Vonnegut, thanking the psychiatrist for his work. Vonnegut, Lifton says, “didn’t talk in a conventional way but he emitted ideas tangentially.” In some respects, Vonnegut’s feedback is much like Slaughterhouse-Five itself: an unconventional novel that circumvents traditional storytelling to get the job done.

Slaughterhouse-Five is a rambling collage of a book that works because of Vonnegut's genius. Roston uses a similar literary construct, jumping around in his own narrative. The PTSD material alternates with how Slaughterhouse-Five came to be and how it changed Vonnegut’s life. There’s a lot of good information for fans of the book, like the real-life inspiration for poor old Edgar Derby (a fictional American high school teacher shot at the end of the war for stealing a teapot) and even Billy Pilgrim himself.

The relationship between O’Hare and Vonnegut is explored more fully here than in the novel. Roston even provides an explanation of what Vonnegut calls in Slaughterhouse-Five’s Chapter One the “perfectly beautiful trouble” he got himself into while teaching at the University of Iowa writing workshop (it was an affair with one of his students).

One issue that Roston touches on only briefly is Vonnegut's reliance on writer David Irving, who in the 1960s was considered an expert on the Dresden firebombing. Years later Irving morphed into an infamous Holocaust denier. In England and Austria, where laws on Holocaust denial are strict and uncompromising, Irving served prison time for his grotesque mendacities on Auschwitz.

Vonnegut’s reliance on a Holocaust denier is surely unintended, given Irving didn’t achieve his notoriety until well after in Slaughterhouse-Five’s 1969 publication. But did Vonnegut have any after-the-fact thoughts? Roston leaves that matter to the wayside. It's a literary mystery that demands further exploration, particularly given Slaughterhouse-Five’s uncompromising stance on war, let alone his gleeful Nazi-killing story.

Still, The Writer’s Crusade is an important consideration of Kurt Vonnegut and the legacy of Slaughterhouse-Five. Even better, Roston’s work will send readers back to the original novel, and with fresh new insights on Vonnegut’s complex masterpiece.