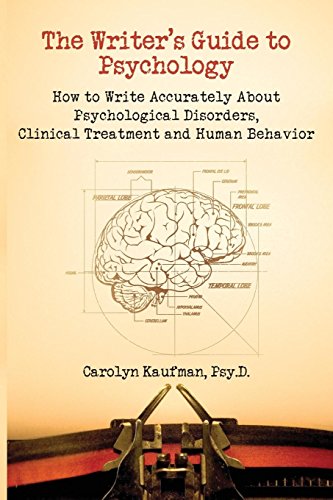 Is the term “nervous breakdown” an accurate description of what can happen to someone under stress and who might be struggling with a major depression or panic attacks? Is mental instability an ingredient in the psyche of a creative mind? Are the characters depicted in popular films and books accurate portrayals of actual, real-life psychiatric disorders?

These are but a few of the questions that Carolyn Kaufman, Psy.D., adeptly addresses in her new book The Writer’s Guide to Psychology: How to Write Accurately about Psychological Disorders, Clinical Treatment and Human Behavior. Dr. Kaufman’s unique book is an in-depth journey into the world of the human mind that few people see and fewer people understand. She illuminates and challenges the myths and erroneous assumptions that the public may have (as well as writers) regarding psychological issues, assessment of prospective clients, and the actual issues addressed in psychotherapy.

Diagnostic errors made during interviews/intakes with clients and myriad other critical factors necessary to understand the patient’s underlying issues, in addition to effective therapeutic treatment models are articulately expressed by the author—thereby providing a bird’s eyeview into the recesses of the darker sides of the psyche. Dr. Kaufman’s explanations regarding diagnosis and interventions for those clients who may have a severe mental illness and who are (in extreme cases) contemplating suicide or homicide are very helpful for writers to be able to accurately create believable characters as well as the evolution of those characters’ illnesses.

Dr. Kaufman educates, providing an authentic approach to processes of the mind and explaining what constitutes a need for concern by the public at large, readers who may be psychologically sophisticated or not, as well as for writers who often create unrealistic characters in books, screenplays, and other creative venues. The book would especially benefit screenwriters, journalists, and particularly writers of psychological thrillers. But writers of all genres can learn a great deal from Dr. Kaufman’s breadth of psychological insight.

The Writer’s Guide to Psychology: How to Write Accurately about Psychological Disorders, Clinical Treatment and Human Behavior traces the dramatic evolution of the horrendous cruelty that people (clients) suffered in the first mental hospital in 1357 (in London) where they were “often chained in dark cells with an iron collar and another hoop around the waist that held them pinned to the wall.”

Under the guise of “helping” people, for example, Dr. Kaufman explains that “Dr. Gottlieb Burkhardt performed the first lobotomy on six schizophrenic patients in a Swiss hospital in 1890” which required the “removal of both of the frontal lobes” of the brain. After surgery, there were dire consequences for most of the patients in their capability to reason and make ordinary decisions. In addition, these primitive methods of treating people with mental illness often resulted in a patient’s inability to be creative or feel compassion for others. Though times have changed dramatically and there are many new interventions for people struggling with psychological issues including medications, various forms of therapy, and as a last resort the controversial use of ECT (also known as electro-convulsive therapy), the stigma remains.

Dr. Kaufman’s provides many examples of inaccurately written characters from books and films that add considerable weight to her expertise in the psychological arena. Throughout the book, these numerous references from both famous and not so famous portrayals of people with psychological difficulties will fascinate most readers.

One famous example of an accurate portrayal of a client and his relationship with a therapist is taken from the hit show “The Sopranos,” where the lead character, Tony Soprano (who is also a Mafia kingpin in the series), regularly attends therapy. The therapist (Dr. Melfi) was raped during one season and due to the violent nature of her client, felt he would avenge her attacker if the facts were revealed. The writers for “The Sopranos” resisted the temptation to portray a wounded shrink who manipulates her client (Mr. Soprano), and in that process, they enhanced the reputation of the therapist and gave further credence to her character in the show. Dr. Kaufman very passionately delineates the fact that writers can create very dramatic and tension-filled characters in psychological thrillers and other films/books while being authentic at the same time. The author’s scope of knowledge about the concepts and theories used by psychotherapists as well as about various treatment modalities is impressive. In the process, she effectively dispels many myths about the psychotherapeutic process and enhances public awareness of misunderstood categories of psychological challenges. In essence she provides a new toolbox for writers to create characters that are more believable in their actions and reactions.

Her depth of demonstrated knowledge in the field of psychology/psychiatry is extraordinary particularly the methodology used to piece together the various components of the puzzle that makes this book a fascinating read. However, the details of each diagnosis and modes of treatment delineated in the DSM (used by mental health clinicians to categorize various psychological challenges) may be a bit too extensive and overwhelming for some readers. This does not detract from the fact that this book is a welcome addition for writers and mental health professionals, as well as potential mental health consumers.

While the reader is left with a feeling of having completed a course in Psychology 101 for writers and other professionals, the style and information presented capture the reader from the first few pages of the book, leaving us wishing for more books by this captivating author. The Writer’s Guide is a persuasive tool for writers desiring to enhance their plots and create more accurate characters.