Wounds: Six Stories from the Border of Hell 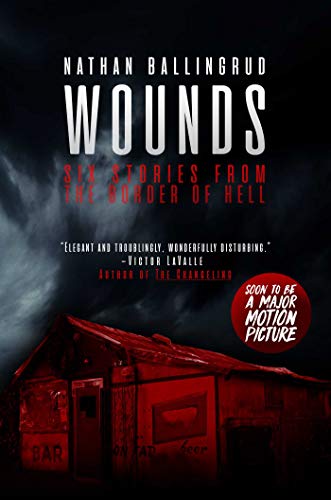 “Wounds will no doubt be remembered as one of the most disquieting and memorable short story collections to come out this year.”

Nathan Ballingrud is a veritable architect of short weird fiction. With every tale, he renders memorable characters, vivid imagery, palpable moods, and riveting plots. His Shirley Jackson Award-winning debut collection North American Lake Monsters (Small Beer Press, 2013) was a brilliant showcase of his writing chops, and Wounds only further establishes his unique storytelling talents. Its contents range greatly in terms of style, from terrifying to melancholic to bizarre, yet always deeply haunting.

The opener, “The Atlas of Hell,” centers around a New Orleans book dealer who has a private stock of rather peculiar titles. Accompanied by a thug sent by an occult-obsessed kingpin, the dealer embarks upon a mission to hunt down a most unusual book: a tome taken straight out of the underworld. This is far from an urban fantasy in the traditional sense, however, and the titular book is also far from what one may expect. As grimly funny as it is suspenseful, this punchy and eerie tale is an excellent opener for this collection.

“The Diabolist” is a marvelous departure from the preceding tale. As much a coming-of-age tale as it is a romance, it is the narrative of a disembodied imp from hell as it communicates with the daughter of the late magical practitioner whom had brought it into our world. Ballingrud appropriately utilizes a second-person voice for this tale of twisted affection, which takes a few unexpected turns along the way.

“Skullpocket” is perhaps the strangest story of all in this collection. Ghouls interact with children in a world of dreams, decadence, and blood, in a ceremony about aging and death. As moving as it is morbid, this tale is told with a fanciful, almost whimsical tone. The works of Mike Mignola and early Clive Barker may come to mind for some readers, but this tale is uniquely Ballingrud’s.

“The Maw” is a frightful glimpse of apocalypse: Hell has begun to blossom on earth, and terrifying creatures are on the prowl, dismembering people and working them into nightmarish designs. Meanwhile, a young survivor agrees to take an old man into the wreck of a fallen city as he searches for something very dear to him—and their journey is as much a tour of hell as it is a personal one, culminating in a haunting, bleakly vivid finale that lingers long, long after.

“The Visible Filth,” previously published as a chapbook (This Is Horror, 2015), is a deeply upsetting tale in more ways than one. After a violent brawl unfolds in his bar, a bartender discovers an abandoned cell phone, full of disturbing images and videos. Hardly a tale about a haunted cell phone, this is only the setup for a dark and twisted journey as Will goes down a rabbit hole of distrust, tension, and terror. This story has also been adapted for a film, itself titled Wounds, starring Armie Hammer, Dakota Johnson, and Zazie Beets, directed by Babak Anvari (Under the Shadow, 2016), and to be released later this year.

And the closing tale, “The Butcher’s Table,” is a period piece set on the high seas. An exiled cultist gets drafted into aiding a group of pirates in their dark voyage aboard the titular vessel. Hellish cargo lurks beneath the decks—after which a group of terrifying demonic entities are in bloody pursuit. A wild, weird, seafaring romp, this unforgettable conclusion nicely rounds out the lot.

Ballingrud’s employment of the English language is simply dazzling to behold. Descriptions range from the deeply atmospheric (“Dust motes drift across spears of light cutting in through a window covered in ratty, bug-smeared plastic,” from “The Atlas of Hell”) to humorous (“the smell of coffee and frying bacon floated into the bedroom like a summons from God,” from “The Visible Filth”).

His characters bleed through every page. Nobody is a saint—sometimes even the main characters are thoroughly unpleasant—yet even the most unsavory folks bear enough depth to serve as more than foils. And what qualities may deliberately rub readers the wrong way often come from places of all-too-familiar places of insecurity, vulnerability, and anger.

There are also a few recurring images that pop up in different stories, such as the monks of Hell, whose heads are secured inside blackened iron boxes. This doesn’t imply a particular continuity to the stories, but rather, that as wholly different each tale is from one another, they are all set against the backdrop of the same darksome, carnivorous universe.

And even the title of this collection is far more than something attention-grabbing. It is thematically appropriate, for its tales do indeed cut deep into the reader’s psyche, and leave their marks raw and scarring, each wholly unique from one another.

Wounds will no doubt be remembered as one of the most disquieting and memorable short story collections to come out this year. Fans of the weird and of horror fiction have a feast in store for them with this book. And with the release of the film Wounds coming soon, now is a perfect opportunity to check out “The Visible Filth,” as well as these other majestic tales of human interactions with hell that only Nathan Ballingrud could tell.