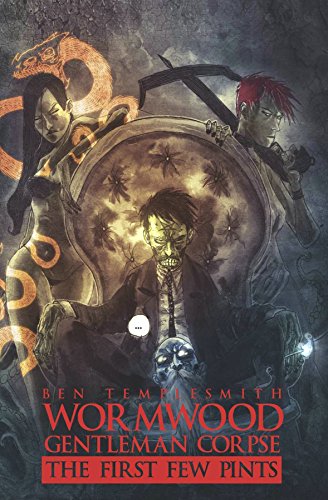 “Wormwood is an intergalactic, inter-dimensional, immortal, happy-go-lucky larval worm-thing with a liking for fine stout, strippers, and most of the other vices planet Earth has on offer. Oh yeah, and he wears corpses like suits.”

If that description of the new hardcover collection from IDW Publishing doesn’t intrigue you then it would be advised you walk away from this creation by graphic novelist and artist Ben Templesmith.

As a series, Wormwood: Gentleman Corpse is a highly amusing mixture of H. P Lovecraft and Monty Python, with a healthy dose of Douglas Adams and Doctor Who thrown in there. Plus Elvis, but that’s hard to explain.

Collecting issues #0–7, the One-Shot, Calamari Rising #1–4, and Last Call, Wormwood: Gentleman Corpse—The First Few Pints brings together all of what makes Ben Templesmith’s work so great- humor, horror, sex, drugs, sarcasm, the eternal struggle of clockwork sidekick automatons to find their bits. Ranging from the origin story of Wormwood and his many inter-dimensional adventures and mishaps all the way to an impressive art gallery at the end, The First Few Pints does not disappoint those that are familiar with Templesmith’s incredible, and avant garde, style of art and storytelling.

The narrative flows well and follows Wormwood, his robotic drinking companion Mr. Pendulum, and his new bodyguard Phoebe, as they battle chest-bursting style aliens (although they don’t exactly come out of one’s chest, ’nuff said there), the depraved Four Horsemen of the Apocalypse, and a race of squid-men that are hell bent on revenge and total, complete assimilation of all dimensions and realities. Just another day at the pub for Wormwood, really.

Best known as a creator of 30 Days of Night, Templesmith has pushed the boundaries of what graphic novels can and should look like. His illustrations are ethereal nightmares of dark backgrounds and blurred lines, his characters squinty-eyed and gaunt, his brushstrokes broad and his pencil lines tight and detailed.

Templesmith knows how to suck the reader in with visuals that at the same time enchant and repulse, keeping one’s eyes locked onto the page, moving from panel to panel, hunting for more story and grotesque beauty; however, to be fair to the reader, Templesmith’s use of red lettering within black balloons can be hard on the eyes, forcing the reader to become one of his squinty eyed characters in the flesh. Perhaps that was intended?

Certainly for mature audiences due to language, sexual themes, violence, and some minor illustrated nudity, Wormwood: Gentleman Corpse—The First Few Pints is not for those looking for a casual, superhero read. It is a masterfully designed work that combines art and storytelling in a way that appeals to readers looking for horror, humor, adventure, and scifi. It should be an addition to any coffee table where the host wishes to spur conversation on how far the boundaries have been pushed when it comes to graphic novels and the art form they have become.