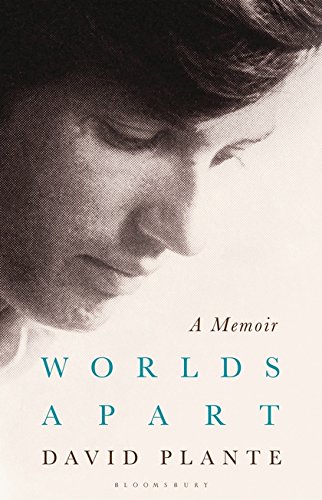 The first three paragraphs of the author’s note of David Plante’s new memoir, Worlds Apart come as something of a warning:

“I would like here to write about the love between Nikos and me, and the life—not lives, but life—we built together, from our first buying two little yellow ceramic pots that started our life and lived in the world outside ourselves, and, too, in our collecting books, pictures plants, records, and, because we were the same size, the clothes we bought together.

“And so the acute sensation of our being together when we listened to music, or hung a picture we had just enough money to buy, or cooked, or watered the plants, or when we wore each other’s clothes.”

The reader reads and wonders what, after having already addressed the dynamics of his love relationship with Nikos in two previous volumes—the terse, beautiful The Pure Lover and the somewhat bloated Becoming a Londoner—can possibly have been left unsaid. The reader then worries that this book might well end up being a list of albums owned, recipes for food cooked, tips on the care of houseplants, and a litany of lengthy descriptions of all those same-sized clothes.

Within a very few pages, Mr. Plante ponders the nature of his parents’ relationship in old age when he learns that they no longer share a bed (“I just needed, after so long, to be a little on my own,” his mother explains to him, most certainly with the expectation that her words would never find their way into print.), then visits New York City, where he wanders around the baths naked, except for a towel pinioned around his waist, and has sex with a woman—something that he seems a bit sly about, writing obliquely enough about the act so that the reader is unsure whether or not it happened, before the author finally exclaims:

“The fact is I do love Jennifer.  And I love her as Jennifer, Jennifer in the character of Jennifer, which character so defines her as a person I almost see her as having her own sex, not so much the sex of a woman but the sex of Jennifer Bartlett, and this draws me to her to hold her and kiss her and make love to her. And, yes, I want it to be known that I have made love with Jennifer Bartlett.”

All well and good.

But, the reader wonders, what of poor Nikos, who was in London breathing in and out during the years of David Plante’s life between 1966 and 2004?

Face it: Not since Lillian Hellman repeatedly swooned over the name “Dash” has anyone made such a point of telling us all about the importance of a particular love relationship. But even she kept her tale of True Love confined to one slim volume. (Hellman also comes to mind when the reader ponders Plante’s sense of self-importance as well.)

Worlds Apart stands as a cogent argument against anyone ever keeping a diary, as only those diarists among us are able to identify the exact moment in which we meet our soul mates. The rest of us must debate over whether we dined at nine or at eight, like Maurice Chevalier and Hermione Gingold in Gigi.

Which makes the reader wonder: Is precision of detail deadly to a memoir?  Are we not happier, in the long run, with those who allow their imaginations to loom large in the retelling of where they come from and where they have been? With those who concern themselves with storytelling in telling us their life story?

The puzzle of David Plante’s creative output is that he ranks among the best living novelists. His fiction is all that any reader could want it to be: poetic, involving, muscular, comprised of sentences like the finest silk threads:  colorful, exotic, tender, and whisper-soft. But instead of creating another work as fine as The Family or The Country, he instead chooses to repeatedly over-share the details of a single aspect of his personal life. It is as if—perhaps—he is attempting to actually conjure flesh from the recollection of it.

Thus it can be concluded that Worlds Apart is a prime example of a great talent misapplied.

And apparently the reader is not alone in this opinion. Within the pages of Worlds Apart (page 139, to be exact, for the diarists among us), Plante recounts the time that his friend, author Philip Roth, telephoned him upon the publication of his—Plante’s—short story “A House of Women” in The New Yorker.

After some nice platitudes about the story, Roth states, “When you write about yourself, you don’t allow any thinking or feeling, and, to me, your writing goes flat and dead.”

Which is perhaps an excellent argument for ignoring the advice of creative writing teachers everywhere and not “writing about what you know.”

The bright spot—and there is one—is situated within the dispatches that come to the reader from the unlikely spot of Tulsa, Oklahoma, back in the ’70s, when Plante was invited to spend a semester teaching at the University of Tulsa.

That bit of light is provided not by Plante himself (who, while pining for Nikos and life back in London, rather churlishly writes, “I don’t care about the university, don’t care abut my students.”), but by feminist author Germaine Greer, who seems as bitingly cheerful as our author is dour.

He has, of course, written before about their friendship, in a memoir called Difficult Women, so even this is a bit of a retread, but never mind.

In Worlds Apart, they meet again at a faculty party, having apparently met, at some earlier point, in Italy.

“I followed her out, past the people near the doorway, to the far back of the yard where the clothes line hung from the side of the garage to a post among the bushes. Germaine raised her arms to grasp the clothesline and, leaning on it, swung back and forth a little.

“She was, she said, living in a converted garage in Tulsa. When I said that I have a house on a lake, she made a moue, then said ‘You would, wouldn’t you?’ I said, ‘You make me feel I have to apologize.’ She let go of the line and laughed and said, ‘A very good feeling for you to have.’”

The two ultimately share that house by the lake and, for a glorious moment, Worlds Apart morphs into something akin to an Oklahoma Odd Couple.  And we all know who’s cast as Felix:

“Back in the house, I found Germaine. I said, ‘I’ve just received some reviews for my novel.’ She said nothing. I said, ‘I suppose I should read them.’ She said, ‘Well, I’m not going to read them for you.’”

Even better, there’s this:

“Germaine came in, about eight o’clock, looking very drawn and pale. I told her so. ‘You’re looking concave. That’s wrong. Germaine Greer should look convex.’ She stuck out her breasts. I served her supper. She never compliments me. I said, ‘You’re not getting enough rest.’ She said, “I use a lot of rouge.’ ‘No,’ I said, ‘that’s not good enough. You must rest.’ It gave me a thrill to tell her what to do. She said, ‘I’m getting wrinkled, and the stress wrinkles I most resent are those here’—and she traced them down from her lower lip to her chin—‘which come from having to restrain myself from saying exactly what I think about everything.’ I laughed and wanted to say, ‘You restrain yourself?’ but said, ‘You should say everything you want.’ She made a face. I was pleased that she ate a lot of supper.”

All too soon, Plante leaves Greer at the lake house and all is as it was: Nikos, London, this and that.

On the plane ride over to London, there is this, which is, for this reader, the final straw:

“Before the airplane took off, I noted, at the far end of the row of seats I’m in, Allen Ginsberg stand up and take out from the overhead locker a canvas bag from which, still standing, he took out and put back papers and magazines as if he couldn’t decide which ones he wanted to read. As there were not yet passengers between us, I leaned forward, when he sat, and introduced myself. I said we’d met years ago through Stephen Spender. ‘Oh, yes,’ he said, ‘I met you in New Orleans.’ He thinks I’m Bryan. ‘No,’ I said, ‘I’m another friend of Stephen.’ Ginsberg smiled. Then the passengers came to take the seats between us.

“I realized I have little interest in Allen Ginsberg.”

Having worked his way through Worlds Apart, the reader concludes that, despite the fact that he seems always in motion, moving geographically from here to there, Plante’s life seems incredibly small as it is limited to those things he can himself see, taste, smell and, upon occasion, fuck. This is a world comprised of dinner parties and fine paintings which can be just about afforded; it is a world devoid of politics, other than as dinner table conversation; of interests in other persons other than the important and/or the sexy; of interests in general; in fact, other than one’s artistic output, one’s sexuality, and, of course, one’s self.

David Plante presents himself as being, like Christopher Isherwood, a camera, a writer whose chief talent is as a witness. Sadly, however, unlike Isherwood, he shoots nothing but selfies.