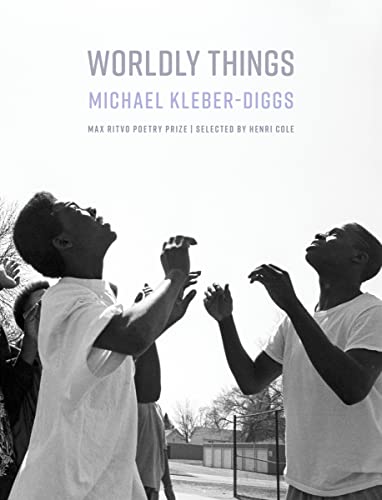 They say you shouldn’t judge a book by its cover. But They aren’t here and They don’t matter, anyway.

The cover of Worldly Things, its exhibition to the world, shows several young Black men, their hands and hearts turned upward. Their eyes face the sky, both longing and worried, all fixed on an object outside the frame. It could be a ball. It might as well be a meteor.

Worldly Things, Kleber-Diggs’ debut, was selected by Henri Cole to win the most recent Max Ritvo prize, named for the brilliant young poet who died of Ewing’s Sarcoma five years ago, and who was also published by Milkweed. It seems altogether fitting that this book should be named for another poet who was himself a vanquished shooting star, because it does, in many ways, feel like a eulogy: not the mundane eulogies so often given for lost relatives or departed friends, but for something larger: the innocence of a world that we once owned that, in fact, was never innocent and that we never owned at all.

But this is, still, a eulogy, and eulogies must always follow form: one must always confront, directly, the fact that someone is gone (in “Grinding Down to Prayer”: “officers, arrest / Black, man, twenty, video, knee / sir, back, dollar, 46, mama, please”) but that life can still be beautiful ( “Prestidigitation” unfurls a story, curling like thin line into sparkling lake water, of fishing with his grandfather of which most country musicians might only dream) and, most importantly, the unspoken lines between all others in every eulogy: you, I, we—we are still here.

The eulogy here is for America, and not, for the American dream, and not, for the places where the American dream and Martin Luther King’s dream intersect and for the places where they never met at all for what is a eulogy for if not to speak kindly of the dead? It is for a land of things that always turn up in these eulogies: mothers and fathers, figureheads with flaws, who are perfect and puzzling; lives that were lived, and lives that were broken.

“Come to my funeral,” he writes in “Gloria Mundi,” “dressed as you / would for an autumn walk in the woods,” and later, “if my day arrives when you had other plans, please / proceed with them instead. / Celebrate me there—keep dancing.”

Perhaps, one leaves “Worldly Things” wondering, proceeding with plans is all we can do;  perhaps proceeding with plans is, of course, the only true way to honor our dead. Otherwise, we’ll just be the boys on this book’s cover, frozen in time, locked forever in our Narcissusian reflection—the only part of us that can ever be immortal—watching to the unknown object in the sky.