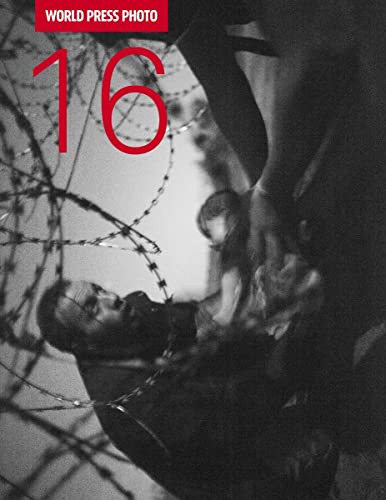 World Press Photo 16 is a collection of the most powerful and poignant images from photojournalists and documentary photographers from around the world that have garnered attention and praise. The long-term projects featured in the book as photo essays, notably “The Battle Within: Sexual Assault in America’s Military” and “A Life in Death” are insightful, saddening, and stirring.

However, holding and viewing this book is a great disappointment because although the images are outstanding, the layout and printing essentially eviscerate the images. The problem is that when 90% of the images are printed across the “gutter” and split in two by a fold that effectively “loses” an inch or more in the center of the image, it is disconcerting and destroys the impact of the photos.

For instance, Mario Cruz of Portugal photographed what is probably an amazing image of someone in abject poverty reading the Koran. But we cannot see the figure, whether he is old or young, because the image is printed across the gutter and nearly two inches of the image are swallowed up in the fold.

The fold also destroys Sergey Ponomarev’s of the New York Times photo of refugees attempting to board a train, as well as Abd Doumany’s heartfelt photos on pages 96 through 101. One cannot imagine the photographers’ dismay at having their powerful images shown so poorly. Even the cover shot is mangled by being printed on its side.

Physical books are supposed to be a rewarding tactile experience of both images and words, and usually using for semi-matte papers and avoiding a high-gloss reflective surface in order to view the image as clearly as possible is preferred. Strangely enough, this book was published on a totally matte paper that actually obscures tonalities, muddies the mid-tones and shadows, and is very receptive to showing fingerprints.

It is standard procedure for “proofs” to be run off and approved before a book is finalized. It is lamentable that Thames & Hudson, typically known for their excellent printing, made the decision to print this fabulous collection of images in such a terrible manner. The images, at the very least, would have been better served by printing the book in landscape orientation rather than vertically, as is clearly demonstrated by the cover photo.