The World Is a Carpet: Four Seasons in an Afghan Village 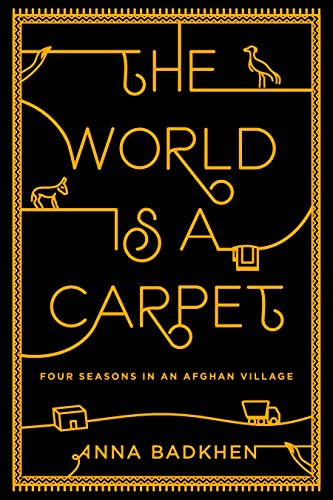 “The narrative becomes poetry as the author describes the simplest and the most complex parts of life in the salty desert.”

As a journalist, Anna Badkhen spent much of her adult life in the “wartorn hinterlands of Central Asia, Arabia, and Africa.”

In this book, she takes us with her on a journey to Oqa, a village in Northern Afghanistan so small and insignificant to the outside world that Google has not captured it, and the Taliban passed through finding nothing of strategic value. Ms. Badkhen felt compelled to return “to the land of indescribable beauty and unspeakable violence.”

It is hard not to quote from the text again and again in order to share the amazing beauty of the author’s words. The narrative becomes poetry as the author describes the simplest and the most complex parts of life in the salty desert.

Simple pen-and-ink drawings graphically convey life in a way words cannot: e.g. a woman bent over her loom, another sweeping with a twig broom, men lounging on a purloined bedspring, small landscapes, and especially—faces.

The carpet is a metaphor for the world and for the sum of their lives:

“The world is not round. It is rectangular! There is Pakistan on one end. Turkmenistan and Uzbekistan on the other end. Iran over there. The world has four corners. The world is a carpet.”

As “a collector of other people’s joys and hardships” Ms. Badhken describes being adopted into Baba Nazar’s family, “mothered, fathered, fed and loved with the kind of unconditional love that wrapped its tired hands tirelessly around me just because I was there . . . because in war and sorrow, love was the quintessence of defiance.”

The story begins in pre-dawn darkness. We follow Baba Nazar and his son Amanullah on their journey to purchase wool for this year’s carpet. Negotiations are difficult because the family has accumulated debt with this middleman. Ultimately, they agree to purchase only enough wool for a narrow runner. Thawra, Amanulla’s wife, will weave it—knot by knot—providing much needed cash to sustain the family. They may come away next fall with about two hundred dollars.

“For the next seven months, Thawra (will) squat on top of a horizontal loom built with two rusty lengths of iron pipe, cinder blocks and sticks in one of Oqa’s forty cob huts. Day after day, she (will) knot coarse weft threads over warps of thin, undyed wool, weaving the most beautiful carpet I have ever seen. . . .

“Thawra’s will be a diamond pattern her mother and her mother’s mother wove before her on the backdrop of wars past. Under her thin fingers, almond-size flowers with ogival petals will shine in a field of ocher and deep maroon. Each flower will bloom from two hundred and forty knots she will tie by hand, the way her foremothers did; each knot will be a temporal Möbius strip that ties past and present.”

Of course, there will be mistakes. “A flawless design would challenge the perfection of God.” In truth, the mistakes are more likely due to the interruptions of caring for children or shooing away a goat.

Woven into the story—much like the designs of the carpets—are scenarios of the war and outsiders competing for resources, including gold. The poisoning of cranes symbolizes the juxtaposition of beauty and violence, of life and death. Dreams punctuate the crushing reality of everyday life. Families “swap” brides when neither can afford a traditional dowry.

Seasons are marked less by the calendar than by the coming of blossoms on the almond trees. Melons in the field symbolize the time when the season of fasting (Ramadan) begins. In urban and more affluent areas, women observe the almost sacred ritual of rising at 2:00 A.M. to prepare the pre-dawn food. (Nothing—not even saliva—is swallowed between sunrise and sunset.) For those who can afford it, an ample feast follows the setting sun.

The author contrasts this practice with the fasting season in Oqa, where hunger is a fact of life and fasting is an everyday occurrence. Even the Mullahs don’t bother to visit to share an evening feast:

As the fasting season ends, there are signs that the drought is ending as well. There is snow in the high country with weeks of rain following. As roads open the carpet—with its one million, one hundred and sixteen thousand knots—is carried by Baba Nazar’s donkey to Dawlatabad. It will then travel by bus or truck onto a contemporary “Silk Road” ending in Kabul or perhaps London or New York.

In Oqa the loom is folded away; burlap sacks fill the space to store animal feed for winter. Two weeks later, another epoch begins as Thawra, the weaver, gives birth to a baby girl. In time, Thawra’s daughters would follow—“severing yarn with their own sweat stained sickles in time with the sacrosanct rhythm of their hearts.”

In spring Amanullah will return to Dawlatabad to buy wool smelling “like sweat and sheep dung and lamb fat and juniper smoke . . . ”for next year’s carpet.

In writing this memoir, Anna Badkhen brings us into the flat, rectangular world of a small village in Northern Afghanistan. The World Is a Carpet is a masterwork of time, place, and humanity.