A World of Cake 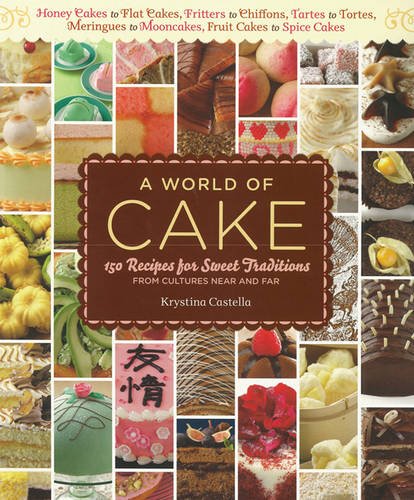 How would you define a cake? Do churros, sweet tamales, empanadas, baklava, or saffron buns come to mind? To author Krystina Castella, all of these fit her very expanded definition: “If a culture defines a dish as cake, then it’s cake.” For category purists, this may be hard to swallow, but if you can go with her concept, A World of Cake is packed with possibilities.

As Castella describes it, a bake sale at the college where she teaches art prompted her new notion of cake, as international students brought their interpretations. Fascinated by the stories behind them, she began to look at the history of cake, which she gives in an introductiory chapter, and how cake affects cultures. Along with the overview, she provides a cake calendar; for cooks who need an excuse to bake, there are cake-related holidays from around the world for every month.

In her attempt to show how all cakes relate to one another, Castella includes such sidebars as “world tours” of wedding cakes, birthday cakes, and Christmas cakes, and “family trees” of meringue cakes, cheesecakes, and sponge cakes. She also includes a brief guide to basic techniques; experienced bakers can skip this, but true beginners may find it short on needed details.

(One note about defining everything as cake: It makes an indexer’s job harder. A cookie entry would have been useful for Nanaimo bars, a quick bread one for Scottish scones, a pancake one for johnnycakes, or a yeast bread listing for saffron buns and pan de muerto.)

Castella’s world tour begins with North American cakes. From the United States, this includes cheesecake, funnel cake, doughnuts, angel food cake, back-in-fashion red velvet cake, devil’s food cupcakes, and apple stack cake (which calls for 7-inch pans—it would have been nice to rewrite the recipe for more-standard 8-inch pans). Canadian entries include cranberry pound cake and a Yule log, and then the recipes move on to the Caribbean, including hummingbird cake from Jamaica and rum cakes from Tortuga.

Bakers accustomed to the cake-mix version of rum cake will find this recipe at least as quick to execute and close in flavor, though it might be better to use more rum in the cake batter, which calls for just 1 tablespoon, and less in the syrup, where the ¾ cup of dark rum, which does not get cooked, tasted a bit harsh. The cake includes the unusual directions of beating in the eggs after the flour is added; the texture may be more delicate if those are reversed.

Many of these opening recipes will be familiar to bakers, but moving into Latin America, the book offers a few surprises. Alongside such standards as tres leches cake come fruitcake-like tamales, filled with chocolate, raisins, and dried apricots and pineapple.

From the Middle East, sweet desserts come drenched in honey, filled with Turkish delight, or packed with pistachios or walnuts. India brings desserts bright with saffron and rosewater, while a Sri Lankan sponge cake offers the creamy surprise of an avocado mousse topping. Nearly all the recipes include at least one variation, a nice touch.

As American readers follow Castella across the globe, they will be struck by how few of these recipes seem truly foreign. Chinese mooncakes mold a pastry crust around a sweet lotus-seed filling; Taiwanese cakes do the same with pineapple in the middle. African sweets include a banana-peanut cake from Kenya and a Tunisian zucchini cake. Even something that sounds truly unusual, souskluitjie, proves to be boiled dumplings covered in butter and cinnamon sugar; a variation uses cooked rice, suggesting rice pudding balls.

Unfortunately, the book is better to read than to cook from, at least based on the recipes tested. The souskluitjie recipe lacks details that might help make it successful. The recipe says to pulse in 2 tablespoons of butter to dry ingredients that include 2 cups of flour until the mixture holds together, but there isn’t enough butter to do that. Then it fails to note how to tell when the dumplings are done, and after the 10 minutes of simmering listed, they weren’t cooked through, and they tended to fall apart.

Two other tested recipes also brought mixed results. Kanafeh, made with shredded phyllo (note that this recipe does not appear under the heading for phyllo in the index), takes a simple filling of ricotta and goat cheese, with a lemon syrup poured over the baked cake. The shreds make quick work of baklava-style desserts, and one variation suggests using the baklava nut filling instead. The nut filling may be preferable; made with cheese, the kanafeh is bland. The topping, a sugar syrup flavored just with the juice of a lemon, needs at least the zest of that lemon as well.

Japanese kasutera cake failed completely. Also known as castella cake, the recipe caught the author’s eye because it matches her last name. She points out in the recipe’s headnote that the cake, though simple (just eggs, sugar, milk, honey, and flour), “requires sensitivity to the ingredients,” because it’s “all about getting the eggs beaten just right.” But following her instructions for the chocolate variation produced a leaden, inedible cake that took far longer to bake than the recipe said. It’s true that this is a cake that often seems to take bakers multiple tries to perfect, but more detailed instructions might get them closer.

With all the recipes, bakers should be sure to follow the good practice of reading through them before beginning. Taking only a glance at what looks like a relatively quick recipe may bring a baker up short upon discovering the need to turn to another page for a cake filling recipe and still another for the frosting. Some of those secondary recipes seem to be used only once in the book; for a baker’s ease, it would have been better to run these with the main recipe (such as the rum syrup used for a rum cake, or a poppyseed filling used for kolaches). Also, in some recipes, the “to serve” instructions offer simple guidelines for garnishing a cake; others, such as the rum cake, call for pouring a rum syrup over the cooled cake and then giving it six more hours of standing time before serving.

Attractively photographed, easy to read, and just this side of too-cute with its world tours and family trees, A World of Cake provides a solid foundation for a homebound world tour—but that tour may be best kept to the living room couch, not the kitchen.