Working with Winston: The Unsung Women Behind Britain's Greatest Statesman 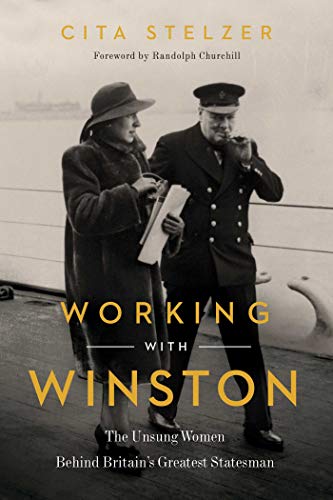 “The story of Winston Churchill’s secretaries and literary assistants has been told before, but not in such a focused and complete manner as in Cita Stelzer’s book Working with Winston.”

Winston Churchill was the greatest statesman of the 20th century; perhaps the greatest statesman of any century. In the 1930s, he tried to warn the world of the “gathering storm” of impending total war. In the summer months of 1940, he saved Western Civilization. After the Second World War, he alerted the Western powers to the growing Soviet threat. Throughout this time period, he relied on a team of loyal, dedicated, but largely unsung assistants and staffers.

The story of Winston Churchill’s secretaries and literary assistants has been told before, but not in such a focused and complete manner as in Cita Stelzer’s book Working with Winston. Martin Gilbert previously wrote about these women (and one man) in his eight-volume biography of Churchill and in a chapter of his book In Search of Churchill.

Stelzer acknowledges, as all who write about Churchill must, her scholarly debt to Martin Gilbert. Her book adds detail and fresh perspective about the relationship between Churchill and his secretaries, and she is careful not to judge Churchill or these assistants by 21st century norms.

He was also a prolific speechmaker, writer, and historian. His many biographers have described him as a human dynamo—energetic, inquisitive, restless, impatient, vibrant, productive, indefatigable. He thrived during crises. He was, as Charles de Gaulle once said, a “man of destiny.”

Churchill’s work habits would have exhausted men half his age. His responsibilities, especially during the early years of the Second World War when Britain stood alone against Nazi Germany, were unparalleled. Stelzer points out that his class status, work habits and the gravity of his responsibilities made him demanding and sometimes oblivious to the needs and feelings of his staff.

Yet, remarkably, the 11 women and one man who bore the brunt of Churchill’s incessant demands remained loyal, supportive, and admiring, even years later when they looked back on their time with him.

Stelzer draws heavily on oral histories deposited at the Churchill Archives—interviews of some of Churchill’s secretaries in which they recalled the high points and low points in their work for the great man. Some of the secretaries kept diaries. Stelzer befriended Jane Portal who, along with others who worked for Churchill, shared with the author their memories of those unforgettable days.

The secretaries worked in cars, trains, planes, and ships. They were required to set up an “office” wherever Churchill went so that he didn’t have to waste a moment. He expected them to be available whenever he needed them. “The secretaries,” explains Stelzer, “had to be ready for everything.” They also attended at times to his personal needs: they cared for his pets, fed his tropical fish, gathered his painting supplies, sorted his mail.

Their recollections of Churchill’s daily activities are quite similar. He started out his days at 7:00 A.M. working in bed, reading newspapers and correspondence that would be brought to him. He would dictate letters, memos, speeches, articles, book chapters at various times during the day and night. He attended the House of Commons. He took a brief nap in the afternoon, often entertained visitors, and usually worked until 2:00 A.M. or 3:00 A.M.. This forced the secretaries to work in shifts.

The secretaries worked at Chartwell, his beloved home in Kent; at the Admiralty when he was First Lord; at Chequers, and No. 10 Downing Street when he was Prime Minister; at his apartment at Hyde Park Gate in London; at wherever he stayed on his many trips abroad.

Grace Hamblin compared Chartwell to “a little Factory . . . there was never a dull moment. It was terrific.” The secretaries all had fond memories of Churchill’s wife Clementine and Churchill’s children, except for Randolph. Churchill’s many visitors included Lord Beaverbrook, Brendan Bracken, Frederick Lindemann (“Prof”), and those courageous civil servants who risked their careers and their liberty to supply Churchill with data about British unpreparedness in the 1930s.

The secretaries accompanied Churchill on his many trips abroad. Kathleen Hill traveled with Churchill to Quebec in September 1944 for a wartime conference. Patrick Kinna accompanied Churchill to Placentia Bay in 1941 to meet with President Roosevelt, and later handled Churchill’s messages to President Roosevelt during the war. Kinna was also with the Prime Minister at the Quebec Conference in 1943, Roosevelt’s home at Hyde Park, New York, and the Big Three meeting in Tehran.

Jo Sturdee and Marian Holmes traveled with Churchill to the Yalta Conference in February 1945, where the fate of Europe as a divided continent was decided.

Stelzer notes that whoever traveled with Churchill “had the full responsibility of organizing everything: the travel and security arrangements . . . ; moving the office and all the work material that might be needed and logging in and out of all the luggage.”

This frenetic activity continued even when Churchill was out of power after the war as leader of the opposition. He still made speeches, including his famous “iron curtain” address in Fulton, Missouri—Jo Sturdee accompanied him on that trip.

And he wrote books—his monumental six-volume history of the Second World War; his four-volume History of the English-Speaking Peoples. He could not have done it without his secretaries and his research assistants. In the book’s Foreword, Churchill’s great-grandson Randolph lauds these women for playing “their full part in preserving our freedom by ensuring the lion’s roar was heard.”

Stelzer, though not a professional historian, is a Churchill aficionado who manifestly relishes the opportunity to write about this “human” and “private” side of Churchill’s life. Despite what she rightly calls his “self-indulgent behavior,” which all of the secretaries experienced, she concludes that “the world benefitted substantially from his insistence that all around him put the meeting of his needs . . . at the top of their list of priorities.” Just so.