Work Won't Love You Back: How Devotion to Our Jobs Keeps Us Exploited, Exhausted, and Alone 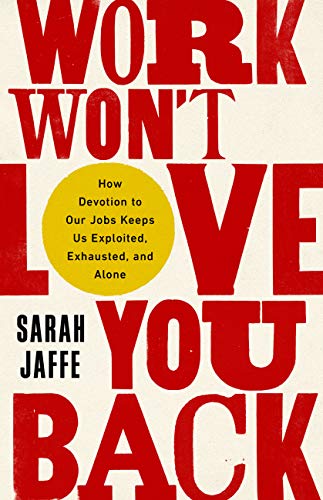 “bound to make many readers reexamine their working lives.”

A self-styled “cranky labor journalist,” Sarah Jaffe finds fault with the way most Americans work—harder than ever, and for less money. Enamored of the idea that work should be a source of fulfillment (and not just a paycheck), they leave themselves open to exploitation, she says.

In Work Won’t Love You Back, she explores this idea through in-depth chapters on 10 fields of work, ranging from teaching and retail to academia and technology. In each instance, she profiles a single worker—nearly all women—and provides a fascinating, if overwritten, history of the particular line of work, sometimes reaching back for centuries. In 16th and 17th century Europe, for instance, “one-third of the female population worked as domestics.”

A freelance writer, Jaffe has been a staff writer at In These Times and the labor editor at AlterNet, both left outlets, and a contributor to The New York Times, the Atlantic, and other mainstream media. She writes from a radical feminist perspective on inequality, social movements, and “the politics of power.” Her main focus is what has happened to the world of work in the past 40 years.

In that time, people have come to look to their jobs for satisfaction. “We’re expected to enjoy work for its own sake,” writes the author. But in a climate of neoliberalism that celebrates free-market economics, workers face oppressive constraints on their yearnings. The world shaped by the policies of Ronald Reagan and Margaret Thatcher has led to the devaluing of women’s work, the rise of unpaid internships, and the precariousness of contingent employment.

Jaffe’s detailed accounts of individual working lives reveal the many ways in which people find themselves exploited. “The labor of love is just the latest way that this exploitation is masked,’ she writes. For women, the “labor of love” begins in the home. “We are still told that the work of cleaning and cooking, or nursing wounds, of teaching children to walk and talk and read and reason, of soothing hurt feelings and smoothing over little crises, come naturally to women.” Creeping from homes to workplaces, this kind of thinking has left workers, both women and men, “underpaid, overstretched, and devalued.”

Domestic workers are told, “You’re just like one of the family,” in compensation for overwork. Teachers, taking jobs to “serve” the community, are “pressed to treat their work as a calling,” putting in overlong hours outside the classroom because of a “natural” inclination to care for children. Retail salesclerks are expected to offer “service with a smile,” seemingly loving jobs with low security, bad benefits, and erratic schedules.

Similarly, nonprofit staffers face “exhausting work,” motivated by devotion to a cause. Unpaid interns, often substituting for entry-level workers, hope for a chance to work in “the brave neoliberal economy.” Adjunct professors, paid by the class, shuttle between colleges, taking what jobs they can get, with a resulting “loss of autonomy and power.” In the technology arena, programmers in “flexible, toy-filled workplaces” put in grueling hours as “a mark of quality and dedication.”

In examining these and other job fields, Jaffe tells the stories of activist workers who have recognized their exploitation and fought to “bring a little justice to the process of working,” through strikes and other actions. The stories are often complex. Many have less to do with oppressive neoliberalism than with the unpleasantries of work itself, but Jaffe raises troubling questions about the ways many of us toil each day.

The author offers no solutions to the problems she describes, although clearly, in her view, capitalism is not the ideal system for encouraging worker satisfaction. Instead, rather abruptly, she concludes what’s needed is a world that allows us to “value the relationships we have with others.” To create such a world, we must free love from work.

“Work will never love us back,” she writes. “But other people will.”

Far too long, a bit heavy on the politics, yet bound to make many readers reexamine their working lives