Words Will Break Cement: The Passion of Pussy Riot 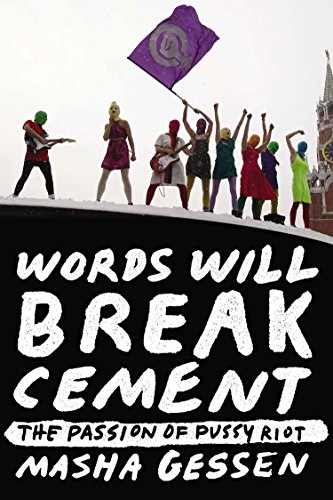 “Just like the ski runs at Sochi, the arc of Russian politics in the Putin era point in only one direction. Downhill.”

The Olympics Moment Putin Doesn’t Want You To See

The most significant viewers’ guide to the Sochi Olympics has nothing to do with luge, bobsled, or snowboarding. It’s a compulsively readable book that explains in unflinching terms the tragedy that is modern Russia.

Words Will Break Cement: The Passion of Pussy Riot is an instant classic, destined to take its place with Solzhenitsyn’s writings about the Gulag, Arthur Koestler’s Darkness at Noon, and Jacobo Timerman’s Prisoner Without a Name, Cell Without a Number.

Pussy Riot was never really a band. It was a group of incredibly courageous young women who protested the Putin regime by conducting illegal “performances” in the Moscow Metro, on a city bus, in a clothing store, and ultimately, in a Russian Orthodox cathedral.

The performances, with lyrics demanding freedom and justice, would be recorded, uploaded, and spread online throughout the Russian protest movement, a sort of digital samizdat.

The Russian government tolerated Pussy Riot until the episode in the cathedral. Gessen describes the arrest, detainment, show trial, preordained sentencing, and imprisonment of three members of the group for performing in a house of worship.

The last two of the women were released from prison several weeks ago so as to avoid their saga interfering with the lovefest that is Sochi.

She begins the book with a heartache-filled thousand-mile journey to the prison where one of the Pussy Riot members was housed. She then backs up to describe how the band evolved, the courage it repeatedly demonstrated in attacking the Russian government, and how Russians rallied to support the women as they went through their ordeal.

The show trial reads like a description of a Soviet-era court proceeding. The judge had no regard for the rights of the defendants. The young women were barely fed during the proceedings that frequently lasted late into the night. The defendants were housed in the courtroom in a hot, airless plexiglass bubble spectators called “the aquarium.”

Gessen tells of a Russia where protest is as unacceptable today as it was under Stalin with everyone from the police to the security forces to the courts to the President’s office arrayed against anyone who dares to speak out.

The most ludicrous moment in the book, however, occurs not in Russia but in the West, when musicians like Sting and Paul McCartney bestirred themselves for the few seconds it took them, or more likely their personal assistants, to tweet their disdain for Russia’s behavior.

How great the courage gap between Pussy Riot on the one hand and the fat and happy rockers who tweeted their moral outrage and then went back to their delightful lives.

The book moves at a deliberate pace toward its inevitable, heartbreaking conclusion—the young women, one of them a mother of a four-year-old, sentenced to two years of 12-hour days in labor camps for the crime of speaking their minds.

In recent months, moral outrage toward the Russian government has centered on Putin’s anti-gay campaign. Protesters in the comfortable West have been pouring out Stolichnaya vodka, which is as ludicrous as it is misguided, because Stoli comes not from Russia but from Latvia. Just like the rock stars, they’re taking a stand without putting anything on the line, the dictionary definition of liquid courage.

By contrast, one comes away from Words Will Break Cement marveling at the courage of the Pussy Riot members making a stand against tyranny while demonstrating the willingness to pay a steep price. Gessen also deserves credit; other journalists equally critical of the current Russian regime are no longer among the living.

Gessen’s previous book The Man Without A Face: The Unlikely Rise of Vladimir Putin is a brilliant and harrowing exposition of how Russia transitioned from chaos to tyranny. This new book is living history: The subjects, of course, are alive, but the era Geesen describes feels like the worst of Soviet times.

Just like the ski runs at Sochi, the arc of Russian politics in the Putin era point in only one direction.