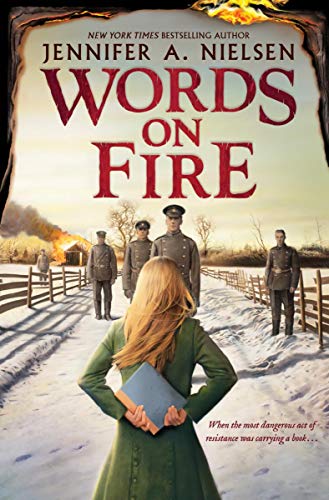 “This David and Goliath tale of a tiny country that stands up to a giant is all the more amazing because it is true.”

“My father was made of magic,” says Audra.

It is the year 1893, and Lithuania is occupied by the Russian empire. Twelve-year-old Audra thinks her father is a traveling magician until she overhears him discussing the importance of “his work” with her mother. That very night, Audra’s sheltered life is shattered. Cossack soldiers invade their home, burn it to the ground, and arrest her parents.

Audra’s parents are book smugglers. They distribute books written in Lithuanian, the language the Russian empire has outlawed.

Audra escapes the soldiers and makes her way to Milda, a woman with a secret bookstore and school within her house. It is Milda who explains to Audra that the Russian Tsar did not just ban books, he “banned the idea of Lithuania. We were all to become Russians. To speak like Russians, and especially to think like Russians. Lithuania was to be erased from the map.”

At first, Audra is reluctant to join the book smugglers, intent only on finding her parents. But then she remembers that her parents’ lives have been dedicated to saving books so that Lithuania can be saved. Audra will continue their work, while also trying to save them.

Her father’s magic tricks, misdirection, and slight-of-hand are what Audra will use to protect herself and Lukas, a boy who is also a smuggler, as they engage in this dangerous work. Both Audra and Lukas have secrets to be revealed.

Threaded within the book-smuggling narrative is Audra learning how to read and write, for her parents thought they could protect her by keeping her illiterate. As Audra studies on her own, she begins to see books in a new light.

“Every book,” she realizes, “had suddenly become a life I could save, something that breathed out ideas as unique to the world as every person was unique.”

When a priest asks Audra how he can help fellow Lithuanians feel powerful, Audra now knows the answer. “You give them books,” she whispers.

Audra’s new-found reverence for books will spark many questions in young readers’ minds: Why would people risk their lives and even die to keep their language? Why was that so important? How did they do it with only books are their weapons?

Some of the story’s momentum slows down in the middle, but then it picks up and races toward the end, wrapping up with an epilogue in 1904 when the Lithuanian book ban is over.

This David and Goliath tale of a tiny country that stands up to a giant is all the more amazing because it is true. To those of us outside of the Lithuanian community, Words on Fire is a little-known tale that needs to be read. It’s a love letter to Lithuania and to its people, like Audra, who saved it.