Woodstock: 50 Years of Peace and Music 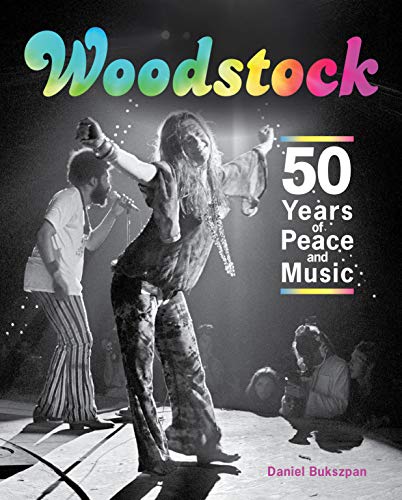 “It smelled like a combination of mud and shit. But the fact that 400,000 people could be in an environment like that and generally be so euphoric is pretty extraordinary.“

Let’s take a stroll back 50 years via Woodstock: 50 Years of Peace and Music by Daniel Bukszpan and learn the truth about what really happened.

Based on over 100 interviews with performers, attendees and others, here are first-hand stories—even if time-hazed—of the largest festival of peace and love in modern times. Listed herein is a bountiful account of every performer (whether included in the Woodstock documentary that followed in 1970 or not), their entire set lists, and great pictures, many taken by photographer Amalie R. Rothschild.

The introduction by Melanie, pop singer who sang at the festival and became an instant celebrity, provides the reader with an actual “I was there” briefing and first-hand account.

The originally planned site of the Woodstock Music and Arts Festival in 1969 was Wallkill, NY. It soon changed to a large dairy farm, owned by Max Yasgur, in Bethel, New York, due to permit and logistics problems. And the rest, as they say, is history.

As the attendees amassed, “The promoters decided that rather than fight the escalating situation, they would announce that Woodstock was a free festival.”

Amid rain, mud and muck, as well as rumors of tainted brown acid, a chief problem was that of sanitation—specifically Port-A-Potties. “There were 1,500 toilets for more than 400,000 people, which means that there was one toilet for every 267 concertgoers.” Without enough water to last the three plus days of the festival, well, you get the picture.

And as stoned as Janis Joplin was during her set, she showed her concern for the crowd. “’How are you out there?’ she asked. . . ‘You’re staying stoned and you got enough water and you got a place to sleep and everything?’”

Toward the last of the three days, conditions were getting more dire. Said Elliot Cahn of Sha-Na-Na, who performed on Sunday, the third day of the concert, “It smelled like a combination of mud and shit. But the fact that 400,000 people could be in an environment like that and generally be so euphoric is pretty extraordinary.“

Fun fact #1: Although Arlo Guthrie is known for his hit, “Alice’s Restaurant Massacree,” he never performed it during his set at Woodstock.

Fun fact #2: Though it was widely believed these artists appeared at Woodstock, they did not: Jeff Beck Group, The Doors, John Lennon (couldn’t get into the country), Bob Dylan, Iron Butterfly, and Joni Mitchell (had to be on The Dick Cavett Show the next morning), among others.

Fun fact #3: “The Women’s Group of the Jewish Community Center of Monticello donated thirty thousand sandwiches that they had prepared. These were distributed by the Sisters of the Convent of St. Thomas.” Why can’t we all just get along?

A sad truth was that many Woodstock performers died young from overdoses, including Janis Joplin, Jimi Hendrix, Tim Hardin, and Paul Butterfield.

Woodstock: 50 Years of Peace and Music by Daniel Bukszpan is an excellent work filled with facts, (in many cases, last-chance) interviews with celebrity performers, and then-teen (now-boomer) attendees, and wonderful photos to take the reader back to that controversial yet peaceful, historic event during the summer of 1969.