Wondrous Beauty: The Life and Adventures of Elizabeth Patterson Bonaparte 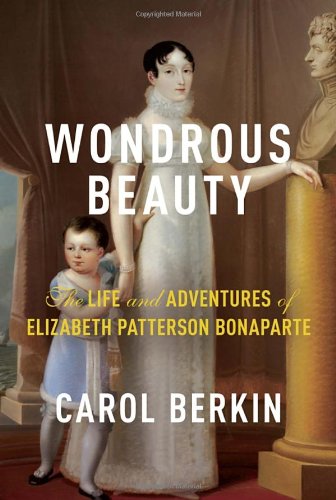 On Christmas Eve of 1803 an 18-year-old Baltimore beauty named Elizabeth (Betsy) Patterson defied the warnings of her father and married a dashing 19-year-old French naval officer named Jerome Bonaparte, coupling her fortunes to the most famous family in the world.

Jerome was the youngest brother of Napoleon Bonaparte, the French First Consul who would soon crown himself emperor. Profligate, irresponsible—he abandoned his naval post when it bored him—and charming, Jerome seemed to young Betsy an escape from a domineering father and an avenue to European royalty far more glamorous than staid Baltimore. She adopted French fashion by wearing a near-transparent wedding dress (with an undergarment beneath) guaranteed to shock her American family.

Her disapproving father, William Patterson, proved right in his opposition. Napoleon was furious at his brother’s impulsive marriage to the daughter of an American merchant, no matter how pretty she was.

He threatened to cut off Jerome, pressured a Paris ecclesiastical court to annul the marriage, paired his silly brother with the princess of Wurttemberg, and as a reward for abandoning Betsy Patterson, made Jerome King of Westphalia, a kingdom in today’s Germany.

The pregnant and humiliated American bride had meanwhile been refused entry to France and was forced to return to Baltimore. Betsy would never marry again and would press her claims to the Bonaparte name and fortune almost until her death, seven decades later at age 94. By that time she’d outlived her only son by the marriage, Jerome Napoleon Bonaparte, or Bo.

This extraordinary story is the subject of Carol Berkin’s brisk and intriguing book, Wondrous Beauty. Dr. Berkin, a professor of history at Baruch College and City University of New York, is a scholar of women’s history. The sad, fascinating story is told from Ms. Patterson’s point of view. Betsy’s father is overbearing, Jerome a weak-willed abandoner notable for life-long incompetence, and Napoleon ruthless in his political calculation.

Dr. Berkin notes that society hoped it was witnessing a fairy tale match between Beauty and Prince Charming. But “Had the marriage not been annulled by Napoleon, it might have dissolved under the realization that at times a prince is only a frog in a velvet coat,” she writes.

Betsy Patterson never got over her first disastrous choice. She had suitors for most of her remaining life but feared remarriage might cloud whatever claims her son might have as European nobility. (Their efforts at noble recognition were rejected again and again.) Betsy was instead an early feminist with a skeptical wit, shocking fashion choices, and solitary travel.

She used what money she salvaged from her ex-husband and father to make herself a millionaire, partly from bonds purchased during the American Civil War.

The author is a shrewd commentator on this little-remembered story, deftly skewering members of Napoleon’s eccentric family and explaining just how pioneering Betsy’s strong will was at the time. Patterson-Bonaparte went so far as to press her inheritance claims in a dramatic trial in French courts, only to lose yet again.

But Dr. Berkin’s sympathy for her heroine sometimes makes the reader wish for more comment from the guys in this story: William, Jerome, Napoleon, and the ultimately estranged Bo. Elizabeth Patterson could never get over her tempestuous relationship with her father, rushed into an unwise marriage, allowed her husband to return to France on a separate ship, and struggled with the politics of marrying a Bonaparte at the height of the Napoleonic wars. She was capable, headstrong—and blind.

This is Dr. Berkin’s sixth history, and her writing of this real-life soap opera is assured and compelling. The author does a remarkable job of explaining the position of women in society and how Betsy navigated a truly cruel situation.

Spanning nearly a century, the book does have a couple of quibbling errors. It lists Napoleon’s first abdication as 1813 when it was 1814 and places Napoleon’s exile of Madame Germaine de Stael almost a decade before it really happened.

Overall Wondrous Beauty is a fascinating and perceptive account of love and scandal that made Betsy Patterson a celebrity on both sides of the Atlantic. And the brief marriage gave her a Napoleonic grandson—Charles Bonaparte—who became attorney general and a trust buster under Teddy Roosevelt!