Wonderworks: The 25 Most Powerful Inventions in the History of Literature 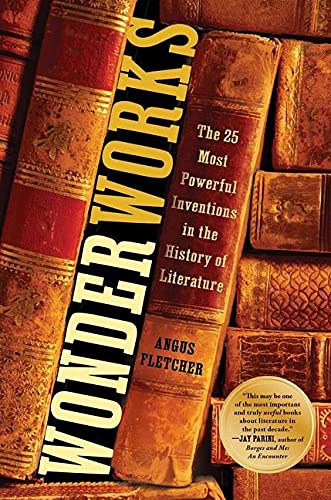 “The reader is left feeling thoroughly informed and deeply knowledgeable, newly created as a person with rich insight into the universe.”

Wonderworks proposes a new way of considering global (but mostly western) literature. Author Angus Fletcher suggests that we can understand storytelling in terms of a series of “inventions.” These inventions are not objects but cognitive technologies: mechanisms that achieve a psychological or neurological purpose in the reader/listener/viewer. It’s a framework which considers how we use literature, rather than what literature says. The resulting book considers how these inventions work in both ancient and modern texts, a refreshingly different approach from the usual introduction to literature.

Fletcher is a professor Story Science at Ohio State University’s Project Narrative. By framing his discussion in terms of “inventions,” Fletcher ensures that his discussion focuses on the inventions’ “unique purpose, engineered with its own intricate circuitry to click into our psyche in different ways.” By considering literature as a technology, Fletcher’s crucial question becomes What is it for?

This is less a matter of social function, and more a matter of neurological effect. Each technology teaches us how to do something. Consider chapter five of the book, titled “Float Above Hurt: Aesop’s Fables, Plato’s Meno, and the Invention of the Serenity Elevator.” Beginning from ancient Greek history and literature, Fletcher draws a line to the learned ability to mentally distance oneself from pain and injustice.

How could such a thing work? Perhaps unexpectedly, Fletcher suggests that satire is a crucial part of the process. Rather than irony predating satire, he supposes that satire as a literary form actually defined and (functionally) invented irony, the “literary blueprint . . . revealing . . . a truth that someone else doesn’t see. That revelation triggers our brain’s perspective-taking circuitry, . . . making us feel like we have a god’s-eye view of the situation. So it gives us the neural experience of literally being hoisted up to a loftier plane.”

This is radically divergent from conventional literary studies. Most literary criticism names effects, then studies how texts evoke the causes. Fletcher digs deeply into the effects to explore the subtle psychological experiences that emerge from stories. He makes the point that this is very much about story. Epic poems, Greek tragedies in performance, capital-L Literature, and film all operate on much the same way in terms of how we react to them. The discussion doesn’t privilege silent, individual reading (very much a new practice in comparison to other ways of experiencing story). It’s a fascinating approach.

Whether Fletcher’s assertions about the neuroscience of story are valid, though, is difficult to judge. He ties EMDR (eye movement desensitizing and reprocessing,  a kind of trauma therapy) to ancient Greek tragic theater through the layout of the ancient stage: “like EMDR, the play’s chorus delivered that prompt [to review traumatic memories] in a dynamic performance that shifted the eyes left and right.” This is certainly possible, but the reasoning behind the connection feels thin, and because Wonderworks is set up as a popular book rather than a scholarly one, Fletcher doesn’t offer research to back up his claims.

As a book fusing popular science with literary studies, Wonderworks is charming. It’s well-written and generally accessible in terms of both language and concept. The book’s appeal is surely widened by its treatment of Great Works of Literature and popular books like Twilight with equal seriousness. The reader is left feeling thoroughly informed and deeply knowledgeable, newly created as a person with rich insight into the universe.