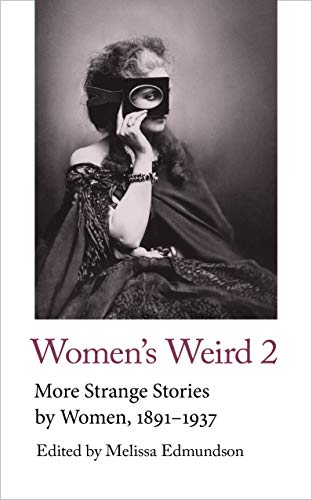 The original Women’s Weird anthology collected works by authors only from Britain and the United States. Women’s Weird 2 narrows the timeframe ever so slightly (1891–1937, to the original anthology’s 1890–1940) but widens the geographical scope to include authors from New Zealand, Australia, Canada, and Ireland as well. The resulting anthology is a useful companion to the first book.

Editor Melissa Edmundson provides an eloquent and thoughtful introduction. She traces women’s fiction through gothic towers and the crowded landscape of Victorian ghost stories into more innovative uses of the supernatural. The stories she has collected, though belong to a later period, in which such writing “become[s] more complex [and carries] more cultural baggage. For writers who had witnessed world war, the devastating effects of imperialism, first-wave feminism, and economic depression, the supernatural story could never be the same.”

The term “weird fiction” was popularized by H. P. Lovecraft, but it encompasses work created long before Lovecraft’s time, and far beyond his scope. As a genre, the weird encompasses realms of fantasy, horror, and speculative fiction that avoid the common tropes of those genres. While some authors point to a dominant tentacle influence, that’s undoubtedly Lovecraft’s aura, and disappointingly phallic besides. Women’s weird is almost by its nature resistant to images of prodding flesh. Such stories are, Edmundson suggests, “best understood as a series of mutations and hybridizations of other literary forms.”

The authors, such as their identities are known, are all white. In sexuality, though, they are rather more diverse, though Edmundson doesn’t particularly remark on that fact. Sarah Orne Jewett’s biography turns on the coy remark, “She never married and lived with the widowed Annie Adams Fields,” but avoids any comment on Orne Jewett’s recognizably lesbian fiction. Lucy Maud Montgomery’s queer sexuality, of late so interesting to scholars, is not mentioned at all.

Those criticisms aside, the anthology is a magnificent one. The stories it collects are wide-ranging and eminently readable, chosen for their lasting quality rather than their historical curiosity. The characters, though products of their time, show an appealing daring. Edith Stewart Drewry’s “A Twin Identity” is narrated by a female “agent-de-police” on the hunt in London for the murderer of a Paris socialite. To catch her quarry, she doesn’t fear a little cross-dressing: “Nature has favoured me, for, as you see, I am a tall but very slight made woman, with a face that lends itself well to masculine disguise. . . . Oh! I make a handsome young fellow too.”

Lettice Galbraith’s “The Blue Room” fuses the conventions of the Victorian great-house ghost story with deeper and more magical horrors which reveal that no one waited for Lovecraft to innovate in this area. A bed which, however newly made, makes itself instantly slept-in proves to be the least disturbing element in that dangerous chamber.

Sarah Orne Jewett’s “The Green Bowl” (colorfully placed directly after “The Blue Room”) carries its cheerfully queer women from terror to shelter to eerie bemusement. Its narrator, Miss Montague, explains her taste for wandering through the countryside with calm determination: “one must have a good companion and an excellent horse, a light buggy, and almost no baggage at all. One must wear a shirtwaist and a corduroy skirt and jacket, she must have a dressing kit of the most frugal sort, no silver boxes or dressing table tools or any tea-gowns allowed! One may provide a very little good tea for emergencies, and a small box of biscuit, and a nubbin of chocolate or some decent raisins.” Miss Montague travels, always, with “Miss Frances Kent sitting there, gowned in white, with rare old pink topaz ornaments.” Two such bold women, determined to go their own way, can’t help but step from the queer to the weird between one bite of chocolate and the next.

Women’s Weird 2 is altogether readable and compelling. It provides a better portal into this increasingly popular genre than many of the recently released books that promise to provide maps of the horror genre “for girls.” Editor Melissa Edmundson has produced a valuable collection for scholars and curious readers alike.