The Women's March: A Novel of the 1913 Woman Suffrage Procession 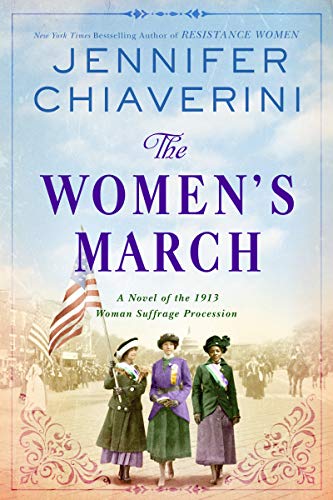 “a reminder that the right to vote was not a thing given, but a battle hard fought and won.”

It’s 1912 and the race for the President of the United States has never been more intense. After failing to win his party’s nomination for a second time, Teddy Roosevelt has broken off and formed his own Progressive Party. His former ally William Howard Taft is the Republican nominee, and Governor of New Jersey Woodrow Wilson is the Democrat. The last thing any of these men want is to step out on a limb and rock an already fierce presidential election.

But this is just the sort of stage the women’s suffrage movement is looking for, and the candidates’ unwillingness to address the issue of votes for women will not stop progress. Maud Malone, an Irish immigrant, has made a name for herself by questioning each of the candidates whenever they appear in public. Trying to get them to go on record one way or another is proving a challenge, but Maud cannot stop, even when threatened with eventual imprisonment.

Quaker Alice Paul has recently returned from prison in England where she has fought hard for the suffrage movement there. She is aware that there will be no progress as long as the issue is kept at a state rather than a federal level. But she is fighting within a movement that has been in place for decades and does not intend to change their tactics now.

Lastly, Ida B. Wells, civil rights activist and journalist, has lived a lifetime in danger. Not shy to publish accounts of the lynchings that white Americans would rather not know about, she understands all too well that the interests of Black Americans will always come second unless they are fought for and won.

After the election of Woodrow Wilson, Alice Paul garners the endorsement of Jane Addams, one of the Women’s National Union’s most venerable members. And with this endorsement Alice becomes president of the national organization and sets her sights on making a statement at a time when all eyes will be on Washington, D.C.—the day before Woodrow Wilson’s inauguration.

Alice Paul organizes the march in Washington, and women from all over the country prepare to attend. Ida B. Wells boards a train in Chicago, marveling at the idea that the white women around her cannot comprehend the privilege they possess at never having to face the indignity of being forced to move simply because of the color of their skin. Maud Malone begins the trek from New Jersey as an outsider because of her “militant” reputation.

As these three women converge upon Washington for the Women’s March, they each bring their own ideas, aspirations, and hopes. Met with jeers, violence, and no police protection, they succeed in bringing attention to the issue of votes for women. As the march concludes it is clear that the world will never be the same.

In the book, The Women’s March, author Jennifer Chiaverini brings a wealth of research and information to an event whose outcome is still felt today. Sadly, the names and the sacrifices of those who organized and participated are not well known, and their hard work has been overlooked and taken for granted.

Chiaverini shines in her grasp of the personalities and policies that went into making the march happen. She understands politics and the friends and enemies one must make in order to stand up for a cause.

The three protagonists are very different people. One is an Irish immigrant and worker, one a highly educated Quaker, and the other an African American civil rights activist. Although the desire to illustrate that the movement belonged to all women makes sense, because the story is told from the perspective of three different protagonists, there are times the narrative feels disjointed.

In spite of this, Chiaverini has given voices to women who worked hard and who gave up much in order for justice to be done. She has painted a portrait of three women who should be hailed and remembered as the heroes they were. And, she has given us all a reminder that the right to vote was not a thing given, but a battle hard fought and won.