The Women's History of the Modern World: How Radicals, Rebels, and Everywomen Revolutionized the Last 200 Years 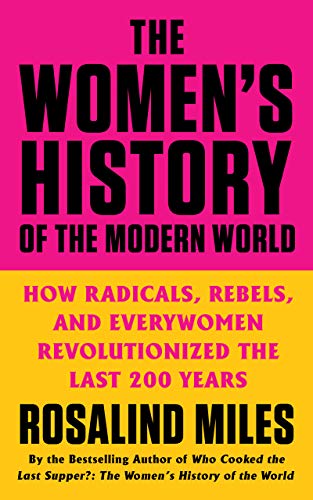 “The Women’s History of the Modern World revolves around certain women heroes, ‘every one in search of an identity, a new life, and a means to throw off the chains of the past.’”

Rosalind Miles starts The Women’s History of the Modern World in the 1700s Age of Revolution.  “Revolutions only succeed because they win women’s support by offering the promise of inclusion in the brave new world” but “when freedom is given out, women are not in the queue.”

The Women’s History of the Modern World revolves around certain women heroes and martyrs, “every one in search of an identity, a new life, and a means to throw off the chains of the past.” They learn that “both liberty and equality are restricted to, and controlled by, the universal fraternity of men,” however.

The text of The Women’s History of the Modern World has many such entertaining snippets of pasts unfortunately forgotten. Including gains made by women, even when temporary, would have helped to better make the author’s points, however, as would have women as something other than always victims.

Miles’ writes in a lively informal style, as when she sarcastically describes the Marquis de Sade as “that great lover of women and all round Mr. Nice Guy.” Similarly, the father of Mary Wollstonecraft’s child is described as ”the all-American twenty-two carrot hustler” and “was bad dad material.”

The narrative constantly jumps about and often confuses more than enlightens but especially for readers not so familiar with the background. The first chapter’s rambling account of Gouges and Wollstonecraft, for whatever reason, spills over into a chapter on Patyegarang of Australia that ends with a discussion of child labor in textile mills.

Broad claims in The Women’s History of the Modern World of the unfairness of the treatment of women, however true, do not find general proof in the experience of specific individuals. Claims such as that French women of the Age of Napoleon “believed that if they had sex without the Church ritual of marriage, they would burn in hell,” at the least needs qualification.

Important points on women’s history in Western Europe appear in this work in various places, with individual examples. The index helps in finding them. The Women’s History of the Modern World also has annotation and a bibliography.