Women of the White House: The Illustrated Story of the First Ladies of the United States of America 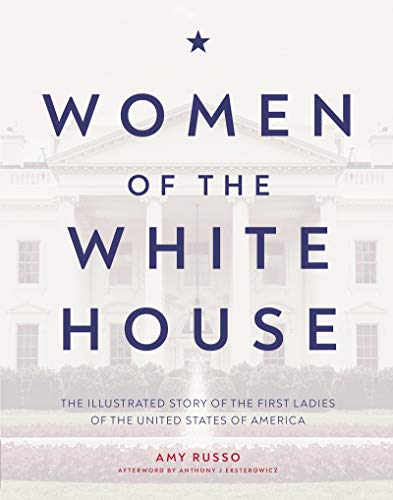 “Russo provides a well-illustrated essay on each of these individuals, reminding the reader that the presidents and the White House have families, and their history becomes part of America’s story.”

Novelist David Baldacci wrote of the President of the United States as the most impossible job on Earth. How much more so is the job of First Lady? Those individuals “ultimately serve by circumstance in a role that’s defined by culture not by the Constitution.” No First Lady takes an oath of office for this unpaid position.

Many of these women did not want the job. “Martha Washington and Pat Nixon came to the job reluctantly, even lamenting their husbands’ elections.,” Anthony J. Eksterowicz writes in the afterword of Women of the White House; however, “First Ladies have moved from being non-partners . . . to being full partners” including in “political matters.”

“The role has transformed over time,” as has society and the women who found themselves in this unelected position. Melania Trump was wrongly called the least prepared First Lady in history, and Jill Biden will assume duties as First Lady “while holding a salaried position of her own as a professor.” None of these women in the early republic could have imagined being either woman.

First Ladies “like Eleanor Roosevelt and Hillary Clinton, carefully cultivated power,” however. The latter would go on to earn election to the United States Senate, served as Secretary of State, and nearly attained the presidency. Sarah Polk “was perhaps equally adept in seeking influence for herself” in fighting for James K. Polk’s agenda of Manifest Destiny.

In Women of the White House, Amy Russo discusses each of these women. First Ladies earned notoriety in public history when they raised the social sophistication of America and the image of the White House; and/or their individual activism. Laura Bush was “maintaining high approval ratings” “while her husband’s sunk.”

Determining whom to include and exactly why proves complicated. Martha Washington and Anna Harrison did not live in the White House as First Lady. Thomas Jefferson served his eight years as a widower. John Tyler and Woodrow Wilson each became a widower and remarried while president. James Buchanan never married. Six First Ladies became widows when death took the President of the United States.

Martha Jefferson has an essay although she did not live to become First Lady. James Buchanan’s alleged relationship with William Rufus King, before becoming president, and Jefferson’s life with Sarah Hemming goes without mention, however.

A socially astute First Lady such as Louisa Adams became a valuable asset for an administration. Dolley Madison famously worked as a “hosting maven who put her skills to political use,” and Edith Wilson “acted as guardian and gatekeeper” during her husband’s crippling medical condition in the last days of his administration.

Other women in this position became controversial, most famously Mary Lincoln. “Her legacy is defined more by her erratic behavior than her contribution to Abraham Lincoln’s political career.” Edith Wilson was “largely a study in how not to handle a presidential crisis.” Lady Bird Johnson drew ridicule for her beautification projects. Michelle Obama was an asset and a liability, for her “blunt remarks characterized by a lack of pretense.” Melania Trump reportedly has anger management problems.

Russo provides a well-illustrated readable essay on each of these individuals, reminding the reader that the presidents and the White House have families, and their history becomes part of America’s story. Such a book becomes interpretative rather than just providing dry facts. Space limitations means that some popular history goes unexplored.

Anthony J. Eksterowicz ends the book with an afterword about when a woman might become president “the one glass ceiling women have yet to break.” A better question might be the role of a future First Gentleman, even though former President Bill Clinton almost found himself in that position.

The content of a book like this one must be selective and subjective, but also attract the reader to want to learn more. Russo does have annotation and a bibliography of sources on these truly historic individuals, “the legacy of the East Wing” “integral to the fabric of the White House.”