Women Artists A to Z 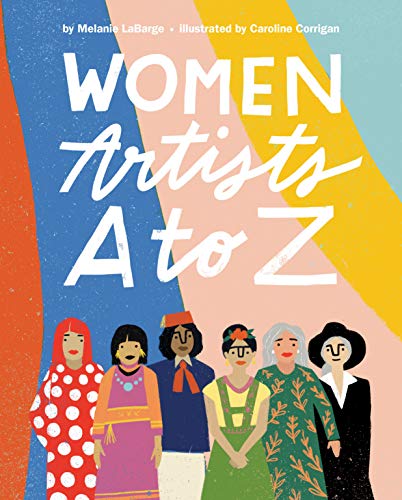 “For those looking for an easy introduction to the idea that women can make art, this book is a solid offering. For those wanting more, the search is still on.”

LaBarge and Corrigan present a diverse mix of women artists, dead and living, in Women Artists A to Z. Rather than using the alphabet for their names, the letters stand for visual ideas, from A is for Angel to W is for Wood. This makes it easy to fill the alphabet since the letters refer to style, subject matter, and artistic elements.

The loss is of a coherent theme holding the book together since the letters feel arbitrary in the end. That’s a minor nit. The bigger issue is that each artist is presented so briefly that there is no real sense of her work or her importance in her particular time or culture. Do we learn how exceptional it was for Judith Leyster to paint in 17th century Holland? Do we get a sense of Maya Lin’s major achievement in the Vietnam War Memorial? All we know about Mirka Mora is that “Mirka made paintings that look like lush forests afloat with colorful angels. Her mix of animals, winged cherubs, and humans swirl together in nature, filling her pieces with the magic of the world around us and inside of us.” There is no sense of the culture Mirka belonged to, the kind of art she saw around her, how what she was trying to do differed (if it did).

The Author’s Notes on the Artists at the back of the book fills in some of these blanks but don’t add enough depth to make up for the extreme brevity of each entry. As a compendium of a bunch of names, the book works well enough, and Corrigan’s bright art is appealing. As a meaningful introduction to women in art history, however, the book misses the mark. It’s a problem to write about artists anyway without showing a single image of their art. Instead Corrigan’s illustrations stand in for the individual artists with the end result inevitably being that everyone’s work looks very similar.

If the goal is simply to introduce the young reader to the idea that women artists exist, then the book has achieved its mission. If the intent is to spark interest in individual artists and their accomplishments, then the book falls short. For those looking for an easy introduction to the idea that women can make art, this book is a solid offering. For those wanting more, the search is still on.