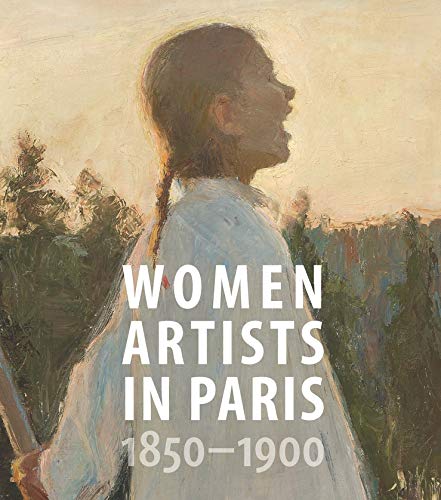 Paris, France. The artistic capital of the world in the 19th century. Inheriting the title at the end of the Italian Renaissance, it became a mecca of all things artful. The Salon, the Académie des Beaux-Arts, the café culture of intellectual and artistic debates and discourse, the international reputation of being the best, all together represented Paris as the pinnacle of artistic aspiration and achievement.

Household names such as Delacroix, Ingres, Corot, Millet, Manet, Monet, Pissaro, Renoir, Degas, and Cézanne, etc. came from this era of art history. Every one of them a man. Which to many an observant thinker over the decades since might seem strange; what happened to the women? There were indeed female artists, painters, sculptors, engravers, musicians. What is known about them?

This is the very question that became the basis of a major traveling exhibition, Her Paris, and this accompanying catalog Women Artists in Paris: 1850–1900. The exhibition and the catalog are concerned with, “offering a detailed account of a crucial historical episode when women painters from around the world came together in one specific location, during one specific time, to pursue their artistic ambitions.”

Six essays review the scenarios of women from slightly different angles, identifying the causes and plights of women without becoming a feminist bashing. After all, these women really wanted to rise above the male dominated and contemptuous nature of the profession and society in general at that time. There is no need to revisit the gender debate again now. One hundred and fifty years removed from the animosity expressed toward women in society (or one would like to imagine so), these paintings can finally be about the art and nothing else.

In addition to the more well known female painters—Mary Cassat, Berthe Morisot, and Marie Braquemond—are 34 others representing several countries including the U.S., Norway, Sweden, Denmark, Finland, Germany, and Spain. Names that might be more readily known in their homelands but were equally influential to the Paris scene: Louise Abbéma, Anna Ancher, Marie Bashkirtseff, Cecilia Beaux, Rosa Bonheur, Helene Schjerfbeck, etc. are represented in this catalog.

Extremely intriguing are the biographies of each artist. Their brief stories tell a tale of personality. Flipping between the 37 biographies and the 89 respective images one gets a sense of the variety of circumstances that had to be overcome for these women to have done what they did.

There is a sense of connection and intimacy as these ladies offered to the public a view of the more intimate subjects they deemed important. Fashion, friendship, children, sisterhood, and nature on the lighter side, but also heavier topics of chores, war, medicine, and personal freedom are depicted.

During this 50-year time span, attitudes did start to change. Women were allowed to study and draw the nude figure, they were accepted into the same art institutes as the men, they were permitted to enter the Salon, they were allowed into cafes, they were awarded medals for their achievements, and their artwork was purchased by reputable establishments. Slowly, but definitively, barriers were removed and opinions shifted.

This book is a tidy collection of works by some remarkable women. The reproductions are gorgeous and constitute the bulk of the volume. Tucked in the back is a short essay on the history of the Paris Salon and why it was such a big deal at the time. All these components serve to educate, inform, and entertain, justifying the value this work will bring to art history lovers.