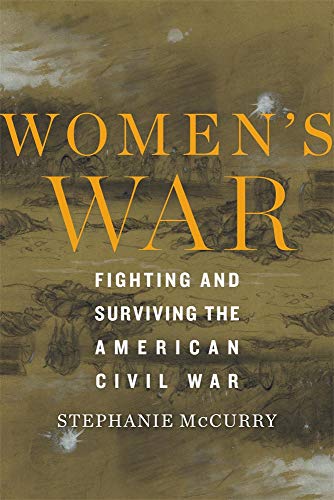 "In Women's War, Stephanie McCurry writes from a perspective of women as equally important in all social issues of the American Civil War."

"Women are not just witnesses to history but actors and makers of it," writes Stephanie McCurry. The author of Women's War writes of setting out to find "the significance of women and gender relations to the central issues of the American Civil War" and why "have women been rendered invisible in histories of war?"

McCurry notes that much of "that history was acknowledged in time and place but promptly and purposely forgotten—literally written out—as soon as the war was over." Yet there exists the "disturbing truth" of "an awkward set of facts": women "manning a cannon, luring soldiers into an ambush, gathering intelligence, penetrating enemy lines, conducting sabotage, planting bombs, fighting in a militia, joining the military."

This book looks only at Southern women, however, only through "three Civil War stories" that "contribute one small part to the far larger history of women and war." The author looks at the conflict of the circumstances of the Civil War with women who traditionally "belonged to the realm of kinship; household, not policy; family, not state."

That point, and so much else, seems lost as the reader tries to figure out just what the author tries to achieve by bringing these three thought provoking essays together in one volume. Even within each essay, major points seem just to drift away.

The first essay looks at Southern women and the issue of treasonous political activities. "Women had a particular kind of citizenship and a secondhand relationship to the state," McCurry, writes, "but even married women had an individual obligation to refrain from treason."

The second essay views emancipation of slave women (and families), with freedom from slavery granted to black men. "The subjects emerged into history together, produced at the same revolutionary juncture," "testimony to the transformative properties of people's war."

"Marriage was part of the basic template of federal emancipation policy wherever it appeared" but "enslaved couples had been denied the right of marriage, and their families constituted on a different legal footing." African American families "fought to secure those relationships" "against the odds, and with limited success."

The issue of slave families existed long before the Civil War, however. Later, in the Ella Thomas essay, McCurry writes "slavery had wreaked havoc on [black] people's lives, and most of the damage was irreversible." "By 1865, far too many families were irreparably broken," the author writes, beyond any "regathering."

Too often, "black women were more recognizable to white officers as vagrants or prostitutes than as soldiers' wives." For black recruits, however, recognition of wives and families became "the quid pro quo of military service."

Chapter three, the final essay, tells the story of Ella Gertrude Clanton Thomas of Augusta, Georgia, whose 41 years of journals "viewed the impact of social collapse and postwar reconstruction in personal as well as political realms." McCurry frames Thomas' diaries "as a small window on this vast landscape" of the international effects of American emancipation.

Thomas, daughter of "one of the richest men in Georgia," lost her fortune through emancipation and the war. Her family's "economic loss was far more drastic than most planter families." "The losses were massive, they were permanent, and they were about a lot more than money."

Ella Clanton Thomas was "unmoored by emancipation," "an excruciatingly intimate process for all parties." "Her response mixed grief, loss, and rage in different measure."

"Women are not just witnesses to war." In Women's War, Stephanie McCurry writes of a perspective of women as equally important in all social issues of the American Civil War. The book has full annotation.