The Woman Who Died a Lot: A Thursday Next Novel 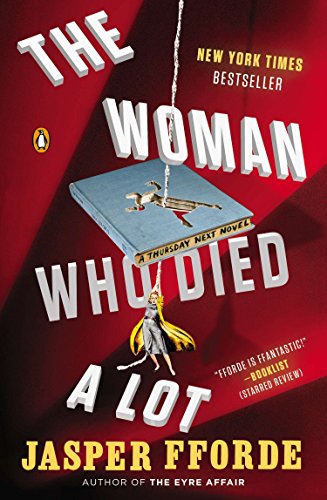 The Woman Who Died a Lot could have easily been titled The Kitchen Sink: Something for Everyone Who Enjoys Science Fiction and Fantasy. This isn’t necessarily a bad thing. One could think of it as The Hitchhikers Guide to the Galaxy meets Bladerunner, with some Quentin Tarantino Kill Bill-type allusions for aficionados thrown into the mix.

Thursday Next is legendary for her exploits in the Special Operations Network: Literary Detectives Division. She specializes in Bookworld and tracking the Pagerunners who have escaped from fiction. Mr. Fforde has a fertile imagination, to say the least. The concept of Dark Reading Matter, a world in which characters in stories are given life, although they were only imagined but never materialized in text, is an example of his more intriguing ideas.

We’re treated to the “Revealment” of the Almighty, who has taken to smiting sinners in Old Testament fashion, and the development of an Anti-Smite Defense Shield to protect humanity from the wrath of God (he issues warnings).

We have zombies, clones, time travel, and weekend retreats to the Late Pleistocene. We get memory manipulation, Letters of Destiny in which the futures of people are decided and delivered in short summaries. Jobs are in part determined by insanity levels, and in some lines of work, a high score is considered a plus.

There is something here for everyone, fun for the whole family.

This is the proverbial madcap lighthearted romp, full of hijinks, parody, and puns. Jasper Fforde does it well. It’s safe to say that if you enjoy that particularly British, Douglas Adams-style absurd delivery of wry observations, you’ll get a kick out of this one.