As a Woman: What I Learned about Power, Sex, and the Patriarchy after I Transitioned 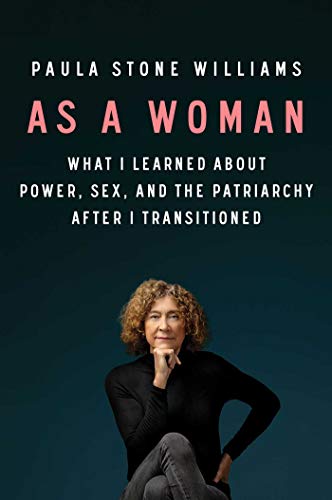 “Williams reflects . . . on an issue contentious for feminists and other women, namely her sexuality: ‘And one last thing. Like every other part of being transgender, I speak from the borderlands between genders.’”

This is a very absorbing and moving account, and self-analysis by Dr. Paula Stone Williams, formerly (as Paul) a prominent Evangelical leader, husband, and father of three, of her decision at the age of 60, to transition to being the self that she had always felt herself to be. She is now an internationally known speaker on gender equity, and in particular an advocate for LGBTQ interests and concerns. She is also again a pastor and pastoral counsellor though with a different, more recently established, and more tolerant church, “Northern Church” funded by three other post-evangelical churches. After her transition, “Evangelical churches shunned me and mainline Protestant churches were suspicious of my evangelical background.”

This was only one of the many harsh lessons she learned on transition from being an authoritative white male (though with mother-induced insecurities) to becoming a mere woman. “When I was Paul, I walked into a room and people immediately looked to me for leadership. My presence was unmistakable and my credentials were assumed, just because I was a white man. As a woman I would walk into a room and be resoundingly ignored. People would think I was just an older woman with little to bring to the conversation. I was afraid that if I didn’t credential myself, I was not going to be taken seriously . . . women have been taught that it is unbecoming to talk about their own accomplishments, and when they see another woman do it they are uncomfortable.” The transition from being an alpha male leader to becoming an alpha female leader was fraught with difficulty for Williams herself, and for her co-pastors one of whom resigned.

While the pre-transition chapters grippingly tell of Williams’ internal conflicts and compromises, the post-transition chapters are the most vivid in describing not only the massive effort to re-make family life with her wife, children, and parents, but also in illustrating the gender dynamics at work (in all societies) of which as “Paul” she had not been aware. As Paula, she was still able to look at women and their various anxieties and insecurities from a male perspective and to reflect on the massive societal discrimination still in place.

“Having been a confident man, I knew exactly what our male co-pastor must have been thinking: These women are rock stars. Why aren’t they more confident? When I talked with him he said that was exactly what he was thinking.”

Williams is now a formidable social media presence, whose overriding aim is “to validate the experiences of women and help men understand how much the world is tilted in their favour.” As she says “I’d better live a long time, because I have a lot to make up for!”