The Only Woman in the Room: A Novel 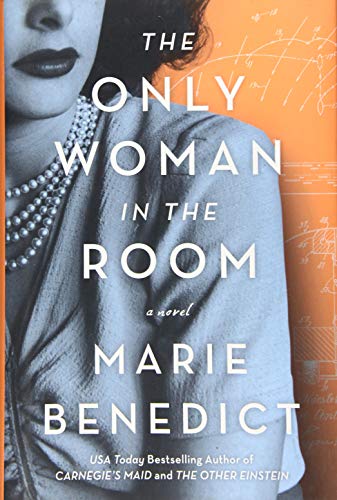 "a worthy read about this gorgeous and talented woman."

A stunning beauty, a brilliant mind. 1933, Europe, pre-World War II. Spying in plain sight. Secrets about The Enemy. The Only Woman in the Room is a fascinating story told from the point of view of a beautiful woman, a talented and charismatic performer, an Austrian Jew named Hedy Keisler.

Hedy’s beloved father understands the political dangers and growing anti-Semitism in Europe as early as 1933 when the story starts. He encourages his daughter to date and then is hopeful she’ll marry an older suitor who manufactures arms and is one of the most powerful men in Austria. Her father reasons that Fritz Mandl is so well-connected he could save Hedy and her family if things go awry politically.

We understand that the stakes are high, as the author takes us through the political landscape between Austria, Germany, and Italy in the years and months before the German occupation of Austria.

Although Hedy’s suitor has a mysterious and not altogether wholesome reputation, Hedy is attracted to her suitor’s ostentatious ways, his wit, and his ability to recognize her intelligence. After the honeymoon, he reveals his controlling nature. We experience the glamour from the color and fabric of the magnificent dresses Hedy wears for her husband’s parties; we see the impact Hedy herself has on men; we understand she dated “boys” and this is person is a man; and so we feel trapped with her during her marriage to this volatile man, a glass doll on a sparkling stage.

Themes run through this book, many still relevant today, especially women’s worth in a man’s world. The #MeToo movement echoed every time Hedy encountered a man who assumed she was would bed him. And it’s revealing to see the pervasive misogynistic culture of the thirties in Europe and Hollywood that until recently was business as usual. Hedy’s response to these men was inspirational: she was strong and fierce, backed by her powerful beauty and confidence.

In Part II the reader gets inside a Hollywood first-person narrative in the voice of a big star. However, the voice lacks the feeling of the hot-blooded woman that Hedy Lamar might have been. In this telling, after her escape from her controlling husband, Hedy Lamar was driven by the guilt of knowing war secrets and not revealing them in a timely manner to save lives and contribute to the Allied war effort. She talks about her guilt, her feelings for her husbands and her father, even her stern mother, but it reads more as an account of the events years after they had all been resolved.

Hedy’s journey toward assuaging this guilt was quite interesting as a tale of events, and the author did extensive research into this story. Most astonishing was Hedy’s unexpected success with an invention that pre-dated and influenced the invention of the cell phone.

The novel was well-imagined and easy to read if a bit emotionally removed and generalized in its telling, told from a distance, even though it’s in the first person. Aside from that quibble, this is a worthy read about this gorgeous and talented woman.