The Wolves of Andover: A Novel 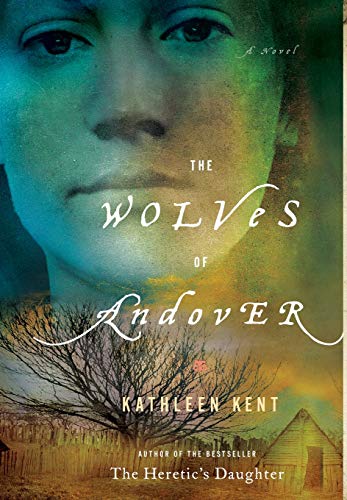 Life in 1673 Massachusetts lived up to Hobbes’ expectations. In The Wolves of Andover, Kathleen Kent offers a realistic depiction of survival through the eyes of a colonial woman, Martha Allen.

With a sharp eye for detail, Kent does not shy away from historical accuracy in order to create a romance full of beauty and lightness. Instead, she depicts rustic settlers living in primitive conditions in close proximity to livestock. Many are hanging on by a thread against Indian attack, disease, and poverty.

Martha’s strength is that she rises to meet these challenges. She has reached the age of 20 without a husband, and her father can no longer afford to care for her. Martha is sent to live with her cousin, Patience, and her family as a servant. Patience is suffering through a difficult pregnancy and requires help around the house. Martha takes on the role of housekeeper caring for Patience’s children, Will and Joanna; her husband, Daniel; and their indentured servants, John and Thomas.

When a pack of wolves starts terrorizing the countryside, Martha forges a bond with Thomas despite his being 30 years her senior. While attempting to ensnare the lupines, his quiet, steady demeanor captures the interest of the sharp-tongued girl. While strong and physically fit, Thomas’ fate lies in the hands of Patience and Daniel. His hope rests on their granting him a parcel of land upon completion of his servitude. Martha’s future, too, is uncertain once Patience is delivered of child.

Yet affairs of the heart come second to survival in this inhospitable environment. The yard is full of mud from freezing rain. Food is improperly stored on the damp cellar floor. A chilled bed struggles for warmth from the hearth. A garden is fertilized with dried fish and manure while a battery of flies hover overhead. A lover’s hands are full of rasping and unyielding calluses. A woman’s threadbare bodice is stained with sweat. Not exactly the stuff of romance novels.

Even scenes of love are tempered by the harsh setting. Martha comes across Thomas bare-chested in the barn. However, he is at work slaughtering a crippled calf. Thomas steals admiring glances at Martha, while she is submerged in a boggy marsh gathering wild leeks. When the village Casanova makes a play for Martha, Thomas pushes his body to the breaking point in order to beat his much-younger competitor in a harvest-mowing contest. When wooing her, Thomas backhandedly compares Martha to a doe in a fable saying, “You are the deer shot through with arrows whose heart grows cold for want of being taken.”

Yet the focus of the book revolves around Thomas’ past. Was he the man who swung the blade that beheaded King Charles I? The regent’s son, King Charles II, is unwavering in his determination to find his father’s killer—supposedly well hidden in the New World. A group of hired torturers is bidden to bring back the man who took his father’s life.

The novel is succinctly split between the story of Martha and Thomas and that of Thomas’ pursuers. It jumps between alternating chapters delineating the approaching meeting point of the two plot lines. This weakens the work as a whole.

Instead of staying in the Massachusetts Bay Colony throughout the narrative, a plethora of characters and settings is introduced as the hit men make their way from England to Boston Harbor. The progression of the book loses its steam when divided between what amounts to two stories that are better off standing on their own.

While attempting to bring more history into the novel such as the royal court, the back alleys of London and life aboard a merchant ship, Kent falters by veering off course instead of concentrating on the plight of her two main characters.

Overall, Kent’s Wolves bites off a bit more than it can chew.