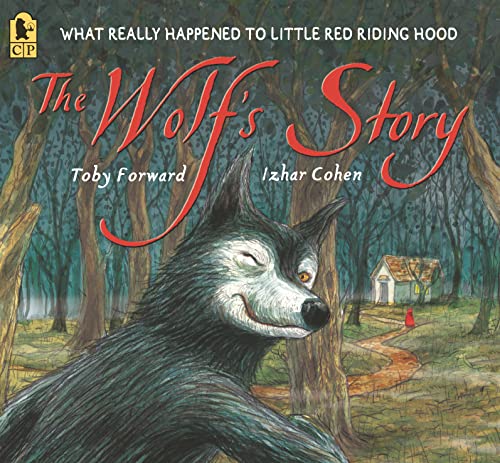 “The Wolf’s Story is a fairy tale classic with a hilarious twist—if you’re old enough to get it.”

Little Red Riding Hood’s story gets a twist when the wolf tells his side of things. He starts by blaming the old woman. “I did nothing wrong. Would I? We hit it off in the beginning.”

The wolf goes on. “Would you like to come and sit a little closer while I tell you about the kid?”

The wolf claims to be a handyman for the woman. “Called Grandma. We were close.”
The wolf sews on buttons, which makes him versatile. He eats lettuce, which makes him a vegetarian. He says that the kid (Little Red) brought baskets of toffee, which were bad for Grandma’s false teeth.

At this point, the reader, ages four and up, should begin to realize that Wolf’s view of things is a little slanted.

Grandma “even made her a red cape, so she could see the kid coming. Did anyone ever make me a cape?”

The wolf explains he saw Red Riding Hood in the forest and she ignored him. “Like I’m frightening, eh?”

Wolf hurries back to Grandma’s. “And this is the part where it all went wrong.”

Wolf claims that he tried to help Grandma get into her dress but that she fell over into the wardrobe due to a tiny bump on her head, which knocked her out cold. At this point, fearful kids might want to step away from this story. Confident kids will hopefully realize that the wolf is stretching the truth to paint himself in the best possible light.

“Anyway, I shut the wardrobe, put the dress on—sort of thought I could cover it up, and pretend to be Grandma till she was better.”

The art is scary for young kids, and the scariest page turn would be the one with Wolf’s eyes on a double-page spread, with Red Riding Hood’s reflection in his eyeballs. The story becomes more familiar now with the famous line, “What big eyes you have.”

Then the woodsman enters, and Wolf escapes out the window. “The woodsman took a swing at me, and I was this close to being a fur coat!”

Grandma is not seen again. The wolf wanders away, looking for handyman work. His hobo bag is made from Grandma’s dress. His tail is bandaged up. He ends the story by asking, “No, please. Look at me. Would I lie to you?”

The book is funny if you’re old enough to understand the humor. It came out in Great Britain 17 years ago and is now available in the U.S. It’s not a good children’s bedtime story—too scary. Adults will love the tongue-in-cheek humor. It could be a good discussion starter for first, second, or third graders about exaggeration, lying, and stretching the truth.

The Wolf’s Story is a fairy tale classic with a hilarious twist—if you’re old enough to get it.