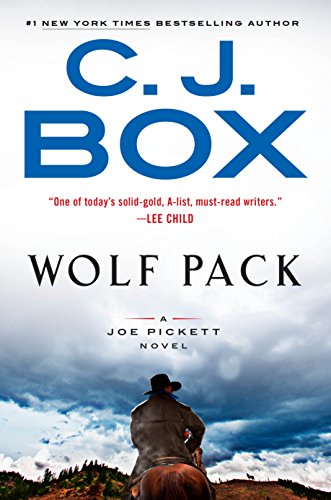 This is the 19th book in the popular Joe Pickett Series, and in it the author introduces game warden Katelyn Hamm. She opens the book.

It's mid-spring in the mountains of Wyoming, and Katelyn has accidentally driven her pickup truck into an erosion ditch while patrolling in the wilderness. Reluctant to call for help, it would be embarrassing, she makes it worse for herself by spinning the tires, melting the snow underneath, and finally bottoming out.

Determined to find a way to free her vehicle on her own, she steps out of her truck to assess the situation, and is surprised and outraged to see a herd of stampeding mule deer being chased by a drone:

". . . a ragged column of sixty to eighty mule deer pouring over the summit of the hill. They were like molten gray lava, grouped closely together and flowing down the hillside in a wild panic . . . A few lost their footing and fell. Others tumbled over the injured deer on the ground. But they kept coming. . . The drone swung back and forth behind the fleeing deer, swooping down at times so close that it almost lit on their backs . . ."

The drone disappears over the hill out of her district and into the wilderness district managed by Joe Pickett. After losing his job in a previous book, our intrepid game warden is back in stride after having been cleared of wrongdoing and provided with new government living arrangements as well as a brand new truck.

While Katelyn is stuck out in the middle of nowhere, Pickett is 80 miles away when the drone crosses into his territory. He's searching for the owner of some leg hold traps that were left unattended when trapping season ended. He finds the mutilated week-old carcass of a male bobcat caught in one of them.

Because of the author's intricate plotting, revealing too much here about how Joe's hunt for the trapper and his search for the drone operator intersect would be a huge spoiler for the reader.

It's sufficient to say that Joe encounters a number of enormously interesting characters during his investigation that eventually lead him straight into danger.  As usual.

But fear not. It's nothing he can't handle.

It's no wonder this author is so enormously popular. Aside from his riveting plots, his descriptions of the outdoors are so spot on. Readers, especially those living in the West, will surely marvel at how real his descriptive accounts actually are. Box manages to place readers so seamlessly into the setting of a scene they aren't even aware how they got there.

". . . The scent of wet loam, pine, and the slightly metallic smell of the roaring river filled the cab. Mist from the tumbling stream hung in the air and beaded on his windshield. The bright April ski darkened as the tree branches closed over the cab of the truck and blocked out the direct sun. . ."

His descriptions of people include exactly the right details to draw a word picture making it easy for the reader to believe them:

"The man was old, stooped, thin, and armed. He wore a dark short-brimmed fedora with a wide band and his trousers were tucked into a pair of tall rubber boots. His white shirt was buttoned at the collar and there was a glimpse of a black fabric vest under his bulky jacket. . . . A stubby double-barreled shotgun hung by a strap over one of his shoulders and pointed muzzle-down toward the road. . . . He had a leathery face, a large nose, and deep inset dark eyes. . . He looked like he'd lived a rough life. . ."

And in every C. J. Box book, readers learn something they probably didn’t know before.

Here's an interesting tidbit about pronghorns: ". . . When born, they were fully formed but miniature versions of the adult antelope. Within a week of birth, they could run as fast—pronghorns were the second fastest land animal on earth, after cheetahs—and cover almost the same distance as mature animals."

Box tells readers through Pickett, that after wolves were reintroduced into Idaho, Montana, and Wyoming, federal protection rules changed:

". . . new management rules meant that the rancher had the right to 'shoot on sight' outside of the specially designated wolf habitat area the state had negotiated with the feds."

There is so much to enjoy in this book. Here’s an excerpt that is just too good not to share. It's from the scene where Joe's falconry friend Nate helps take down the drone in mid-air:

"Once it attained a very high altitude, the drone shot across the sky and descended again in a flash. It was now hovering in front of the deer herd, which caused them to spin and reverse course . . . The pilot was keeping the deer in one spot, herding them as if the drone were a sheepdog . . .

"Peregrines didn't flap their wings when they dropped. Instead the birds pressed their wings against their bodies and descended like missiles, headfirst. Their talons weren't outstretched to grab the target in flight, but folded back to make the falcon more aerodynamic. An instant before intercepting its prey, the bird would unleash its balled talons and strike like a hammer. . ."

Cancel your early morning plans. It's another page turning winner from C. J. Box. Especially gripping is the home invasion scene early on in the book. It's sure to make readers get up and check the locks on all their doors and windows.