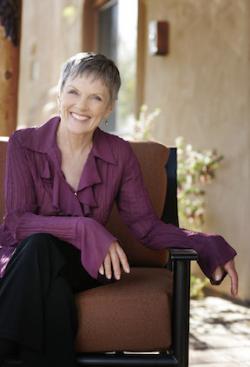 Mystery author C. C. Harrison knew she was going to be a writer when her mother took her to the library for the first time as a child. Since then, she's won national recognition for her suspense novels.

Her fifth book, Death by G-String, a ukulele-themed mystery, introduces us to the Coyote Canyon Ladies Ukulele Club whose first-place win in a folk music competition is jeopardized when their star player is strangled to death with a ukulele G-string. This book has received numerous mystery and suspense awards including: Colorado Humanities Book Award—Winner; Colorado Independent Publishers Association—Second Place; Arizona/New Mexico EBook Award-Finalist; American Fiction Award—Finalist.

"I like writing books set in small towns," says Ms. Harrison, "the kind of small towns people run away to or hide out in. The secrets and the misbehavior there are so much more interesting. I know. I've lived in them."

Ms. Harrison came to the ukulele late in life and fell in love with it instantly. She now owns five ukuleles, two guitars, and two dulcimers. She's made her coffee house debut and plays at all her book signings. So now she can honestly say she was born to be a rock star but writes books instead.

Ms. Harrison can be found in the desert, the mountains, or some far flung corner of the Southwest.

Sage Cane's House of Grace and Favor: A Town Will Only Rise to the Standards of Its Women

“Again, Thomas Kies does not disappoint!”

Who doesn't like a nice, juicy scandal especially when it involves a vain, egotistical, self-centered SOB?

“Fair warning: Lock your doors and turn on ALL the lights before you sit down to read. This book starts out with a bang.”

“DeYoung has taken a familiar end-of-the-world-as-we-know-it theme and made it something uniquely his own.”

The Department of Rare Books and Special Collections: A Novel

“. . . a keeper that could easily end up in someone's private special collection.”

Every Hidden Thing: A Novel

No One Will Miss Her: A Novel

“Gripping and sharp as a tack.”

“The descriptions of the beauty and mystery of the Grand Canyon are spot on.”

Meet Ed Runyon, a cop with a heart, though he doesn't always show it.

Survive the Night: A Novel

“Movie fans will thoroughly enjoy the many references to classic movies and how they are woven into the narrative.”

In the Garden of Spite: A Novel of the Black Widow of La Porte

“a mashup of Norwegian noir and true crime at its finest, an amazing fictional account of Belle Gunness, one of the most prolific serial killers in history.”

The unnamed assassin in Endings receives coded text messages that read like this:

Call Me Elizabeth Lark: A Novel

“Brace yourself for a never-saw-it-coming ending.”

The Girls Are All So Nice Here: A Novel

“A dark and twisted but riveting story.”

The Captive: A Novel

An undercurrent of tension wafts off the pages of this book from the start. It's subtle, but it's there. Readers know right away something is going to happen. Something bad.

Hide in Place: A Novel

“a captivating story that leads to an emotional but satisfying bittersweet ending.”

The Sons of Philo Gaines

“The quality and clarity of Ritt's writing and delivery are truly superb. Readers will feel like they're watching a movie.”

The Girl Who Wasn't There

“riveting and action packed right up to the astonishing and surprisingly satisfying ending.”

“Doering's wordsmithing is the absolute gold standard and leads readers to a stunner of an ending.”

Leave the World Behind: A Novel

“. . . supremely skilled writing even though the plot goes missing in action early on.”

This is an odd duck of a book, no question about it.

You Are Not Alone

“Suspense the way it's meant to be, bit by bit, drop by drop.”

The Girls Weekend: A Novel

“Kosa blends secrets, lies, revenge, and deceit into a complex stunner of a book.”

“Don't make any plans for tomorrow, people. You're not going anywhere until you finish this book. And you'll need time to catch your breath, too.”

“The Second Mother is a beautifully written page turner.”

The Last Flight: A Novel

What does someone need to successfully disappear without a trace?

“The Last Scoop is another surefire success for author R. G.

Strike Me Down: A Novel

“Mindy Mejia brings it big time with this compelling kick boxing themed mystery. It's a knockout!”

“It's an unforgettable experience. The author is an extraordinary writer . . .”

“Lost at Sea is a story of love, loss and grief, and of people who try their darndest to do the right thing, but have it turn out all wrong anyway.”

Hide Away (A Rachel Marin Thriller)

“faithful and true police procedural devotees will thoroughly enjoy the ride Pinter takes them on . . .”

"Thin Ice is primed for a sequel."

"Readers will gladly fall headlong into this brilliantly conceived novel."

"Rice, the author of more than 30 books, is a master at writing descriptions and portraying story settings, a skill other writers admire and strive to acquire."

How Quickly She Disappears

“A subtle, but ceaseless undercurrent of tension throughout builds to a shocking crescendo in the final pages.”

The Wild One (A Peter Ash Novel)

"Nick Petrie takes you on a joyride, racing first in one direction then spinning off into another. Just try to catch your breath!"

“J. T. Ellison skillfully unwinds a complex tale of lies, deception, and murder spiced up with backstory and well-fleshed out characters.”

“An escapist read in which the lawmen are the outlaws, and the good guys win.”

“Author Kavanagh is a master of head-spinning misdirection, firing one OMG plot twist after another.”

“Martin Edwards crafts vivid descriptions of both character and setting that embed the reader into the scene in a way few writers can achieve.”

“when it comes to gritty real life plots, believable characters, and on-point descriptions of both people and place Thomas Keis can't be beat.”

“a lip-smacking light mystery flavored with lovable characters and Southern charm that readers of cozies will devour along with the scrumptious recipes included at the end.”

The Birthday Girl: A Novel

Someone We Know: A Novel

“Lapena uses craft, not gimmicks, to bring a deliberate rhythm of tension that keeps readers engrossed from beginning to end.”

This Tender Land: A Novel

“a book you won't own. It will own you. Long, sprawling, and utterly captivating, readers will eat up every delicious word of it.”

“A satisfying, indulgent, binge book guaranteed to release a flood of pleasurable endorphins.”

“Author Catherine McKenzie has written a riveting closed circle mystery that will put readers in mind of John Dickson Carr and Agatha Christie.”

“a gripping corporate thriller with characters you'll love to hate.”

The Body Lies: A novel

“Off the Grid is flush with action and vivid descriptions.”

This book, set on the Big Island of Hawai'i, starts off with a bang. Literally!

“A must-read book filled with action packed shenanigans, and a keeper for gearheads.”

Sweeney on the Rocks

“Sweeney on the Rocks is one of the best crime books out this year. Here's hoping for a movie, or better yet, a mini-series.”

“For gritty realism and punchy narrative, nobody beats Joe Clifford.”

“Jeffrey Deaver has come up with another sharp, smart story with intelligent, emotionally mature characters.”

“This book is a delight to read and a keeper for your research shelf.”

Below the Fold (Clare Carlson Mystery)

This book is a mystery reader favorite—a puzzle. There's a murder, a murder list and, eventually, numerous suspects.

Robert B. Parker's Buckskin (A Cole and Hitch Novel)

“Melanie Golding has written a scary, creepy, disturbing book you will thoroughly enjoy.”

“Forstchen's fully developed characters face mind bending moral questions that readers will be forced to ask themselves on the way to the nightmare inducing ending.”

“Stephen Mack Jones' snappy, razor sharp writing is a delight to read. Lives Laid Away is movie material for sure.”

Trouble on the Books: A Castle Bookshop Mystery

“Trouble on the Books is a charming cozy mystery populated with delightful people.”

The Widows: A Novel

Before She Knew Him: A Novel

“a compulsively readable psychological thriller with so many twists and turns you'll need a roadmap to keep track of where you are.”

The Current: A Novel

“Tim Johnston has given us the gold standard of lush narrative description—captivating, mesmerizing, stunning.”

No Exit: A Novel

Half of What You Hear: A Novel

“Half of What You Hear is a character driven, dishy, gossipy, fun read . . .”

“Nobody does it better than McDermid.”

The Guilt We Carry

“the Breaking Bad of the book world.”

Moving On: A Novel

“Moving On goes on and on, but you'll keep reading just the same.”

Do No Harm: A Dr. Katie LeClair Mystery

“Do No Harm’s biggest strength is the way Dr. Katie LeClair fully engages in realistic dialogue and delightful interaction with those closest to her . .

“A thoroughly enjoyable book with an easy going, easy to follow plot, and characters who feel like dear friends . . .”

You Don't Own Me

Mary Higgins Clark readers know exactly what they are going to get.

"Hallinan is easily one of the most entertaining crime writers in the business today."

"several delicious Lifetime movies rolled into one . . . The finished product is superbly satisfying."

When You Find Me: A Novel

“Readers will end up hoping for more of the same from this stunning new author.”

What would you have if John Grisham wrote Better Call Saul? Answer: You'd have The Shotgun Lawyer by Victor Methos.

The Witch Elm: A Novel

“Tana French's writing is like a precious heirloom, something you don't want to let go of, a treasured keepsake you hold close . . .

Death in Paris is a mashup of some of the most favorite literary tropes.

Down the Broken Road: A Rachel Carver Mystery

Rachel Carver leaves her job as an agent with the North Carolina State Bureau of Investigation and begins work as a freelance legal investigator.

I Will Never Leave You

How far will someone go to save a marriage?

How far will someone go to have a baby?

This is a story of truth. But since perception is truth, truth has many versions. In Trust Me, readers sometimes won't be able to tell what is truth and what is not.

Prolific author Stuart Woods has teamed up with co-author Parnell Hall to write this fast-moving romp of a book, a cross between an old hardboiled '50s black and white crime film and a fast moving

Sister of Mine: A Novel

This is a tale of unorthodox relationships, shifting alliances, and contentious allegations.

"Be sure to read this book when you don't have to be someplace or can stay up late. An Unwanted Guest will have readers hooked from page one."

Cecil Younger works as a criminal defense investigator at the Public Defender Agency in Sitka, Alaska.

This gripping gut-level revenge-fueled psychological suspense from Victoria Helen Stone introduces a narrator you will love to hate. As Jane herself says: