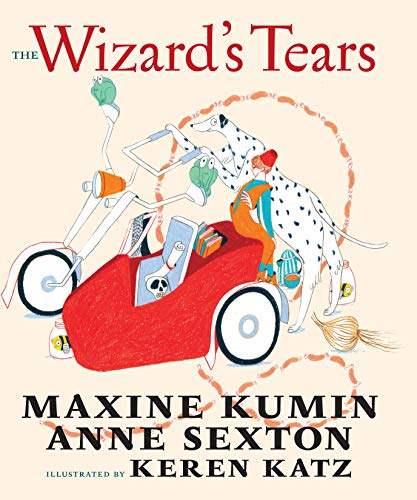 The new wizard is nervous, but he gains confidence as he uses his magic to find a farmer’s missing cows and cure a chicken pox epidemic in the town of Drocknock. The drought takes a little more doing, a spell requiring five wizard’s tears. Of course, by then the wizard is so happy in his new home that he has to resort to an onion to cry.

The drought undone, the young wizard tries a little more magic, failing to heed the previous wizard’s warning that a wizard’s tears are precious and powerful. And sure enough, the new wizard inadvertently turns all of the townspeople into frogs. Now he must set out to undo the damage, first riding around town collecting frogs in his pockets and wheelbarrow.

The story is fresh and unusual, and so is the artwork: Karen Katz’s fine ink lines, decorative patterns, and elongated, stylized figures give the illustrations a faintly 1920s flair.

Katz has a lot of fun with the story: Her cover art shows the young wizard wearing a red fez and red glasses atop his motorbike, in the sidecar of which repose his new wizard school diploma, a stack of books, and a skull. There’s a bit of “be careful what you wish for” here, a dash of hubris, and a nod to The Sorcerer’s Apprentice. You might even call The Wizard’s Tears a coming-of-age story as the wizard tries out his new skills and deals with the consequences.

This book was written by two Pulitzer Prize-winning poets, Anne Sexton and Maxine Kumin. The Wizard’s Tears is a reissue of a book published in 1975, with new illustrations. The wordsmithing is everything you would expect it to be, though the book is an outlier in a time when few picture book fairy tales are being published for older children. Best for fairy tale lovers who appreciate quirky good humor and wizards, not princesses.

Kate Coombs is a children's book author whose most recent title is Monster School (Chronicle Books, 2018).