Without Copyrights: Piracy, Publishing, and the Public Domain 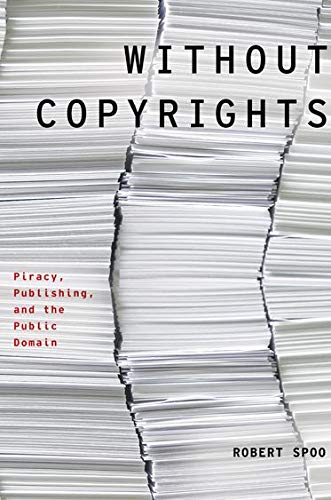 While one doesn’t have to be a copyright lawyer to enjoy author Robert Spoo’s Without Copyrights: Piracy, Publishing, and the Public Domain, it would certainly help.

As with most things we take for granted in our modern world, United States copyright law had a far more labyrinthine path to its current incarnation than one might imagine. It is this path that Mr. Spoo tries—and largely succeeds—to draw for us.

It is helpful to note that the US is currently a signatory of the international Berne Convention, an international agreement that has governed copyright since 1886. As a result, our law is largely in compliance with international standards. While registration with the US Copyright Office puts a copyright holder in a better position for litigation matters, US copyright generally happens automatically once something has been created. That is to say, copyright occurs without the need for much real formality.

But as the author makes clear this was assuredly not always the case. In fact, we didn’t become a signatory in the Berne Convention until 1988—over 100 years later. Therein lies the heart of Without Copyrights.

Mr. Spoo details the growth of US copyright law from its English roots to the particularly rigid procedural nature of the law to its current relatively liberal and international state; however, the vast majority of the book focuses on the gradual shifting of protectionism from 1790 to roughly the mid-1950s.

For example, the 1909 Copyright Act—itself an improvement from the first US Copyright Act of 1790—required that “to enjoy full copyright, foreign works written in English had to be reset, printed, and bound on American soil within a fixed umber of days after they had been published abroad.”

Just the logistical challenges of attempting this was difficult enough but the hyper-formalistic nature of copyright law in the US made it such that the attempt had to be perfect. Anything less than perfect meant that the work simply did not acquire copyright in the US and was thus in the public domain.

This led to two divergent and parallel events: (a) the growth of what we would now term “piracy” and (b) the growth of “literary courtesy,” whereby the original author would be paid a courtesy sum from US publishers—even though this was not legally required—and other US publishers would respect this first publishing by established publishing houses out of pure professional courtesy.

It was this courtesy that kept many famous works from falling into the hands of piracy and helped shape American copyright law.

If this all sounds very interesting, it is. Mr. Spoo manages to incorporate such notable authors as Sylvia Beach, John M. Price, as well as James Joyce and Ezra Pound, the latter two who make sizable appearances in Without Copyrights as major movers of US copyright law.

But as good a storyteller as the author is, and as interesting as his many historical anecdotes are, the subject matter is still only so inherently interesting; even for intellectual property aficionados and practitioners, the intricate details of these backroom stories slow an otherwise interesting subject matter.

Still, Mr. Spoo does manage to weave a tale that might otherwise be relegated to dusty legal archives. For this alone, Without Copyrights: Piracy, Publishing, and the Public Domain deserves a look.