Within Our Grasp: Childhood Malnutrition Worldwide and the Revolution Taking Place to End It 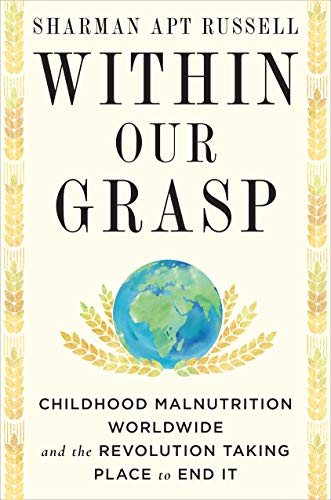 Humans have been hungry for a long time. The 4,000-year-old tomb of Ankhtifi holds the inscription “All of Upper Egypt was dying of hunger to such a degree that everyone had come to eating their children.” The traces of our ancient hunger are left in Paleolithic skeletons: a rough winter or a poor harvest shows up as stunted growth in the bones. The horrors of the Holocaust are embodied in the public mind not by the infernal chimneys and barracks but by photos of emaciated survivors.

Within Our Grasp describes a human tragedy, but as we infer from the title, it’s a tragedy with a sliver of hope. Based on Apt Russell’s 2016 sojourn in Malawi, one of the world’s poorest countries, the book describes numerous programs and ideas designed to combat childhood malnutrition. Interspersed with the stories of innovation and the autobiographical material, there are chapters that explain the biology of hunger and others that use a wider lens to examine the world’s attempts to reduce it.

If there is a magic bullet, it comes in the form of RUTF, ready-to-use therapeutic food. In 1993, Doctors Without Borders called a meeting with representatives of UNICEF, Save the Children, and others. The goal was to come up with a solution to malnutrition. It would be in the form of an easy-to-produce food. It had to contain the right vitamins and minerals; it had to taste good to children (so no cold milk); and it had to be easy to consume (so not a powder to mix with scarce drinking water).

Dozens of experiments ensued, involving pancakes, doughnuts, and chocolate bars. Then one morning, André Briend, one of the key players, noticed the jar of Nutella on his breakfast table. He read the ingredients and soon came up with Plumpy’Nut, a cheap, durable, high-energy paste which required no mixing or refrigeration. Plumpy’Nut has since saved millions of lives and provided a prototype for different brands that are similarly effective.

Apt Russell’s signature statement is that “we are the storytelling animal” and sure enough, besides RUTF, it’s in the stories of individual men and women—researchers like Briend, biologists, farmers, community organizers—that the book finds much of its hope.

Take Steve Collins. An idealistic English doctor-turned-researcher-turned nutritional snack entrepreneur, Collins began by hitch-hiking and cycling across Africa. He spent time working with Mother Teresa in India, and wound up back in Africa creating locally-sourced health food. Collins’s enthusiasm and can-do spirit animates the book. He’s a mover and a shaker, a dreadlocked iconoclast. On his first meeting with Apt Russell he announces that an end to childhood malnutrition is “within our grasp,” the words that give this book its title.

With such focus on the likes of Collins and Briend, inevitably the trope of the white savior springs to mind. Apt Russell pre-empts this by naming numerous Malawians who are humbly making a difference: the teacher Fanny Chimbaya, the organizer Lizzie Shumba, the farmer Noera Sauka.

More than once she describes her discomfort at her status as a privileged, white, western writer-researcher. At one point, she visits a village with her husband. She is immediately surrounded by adoring local children. As they take her hand, instead of feeling universal love she finds herself worrying about catching scabies, an infectious disease. It takes a writer of rare courage to put such thoughts on paper, but courage she has in spades.

She doesn’t shy away from naming the bad guys. Malnutrition is not a blameless malaise, and it turns out that corporate greed has left a trail of destruction in Africa and elsewhere. For decades, the food company Nestlé aggressively marketed sugary baby formula as a replacement for breastfeeding. The results were catastrophic. Agribusiness, too, is a major perpetrator, forcing farmers into monocultural farming for profit instead of sustainable multi-cropping to feed local people. While Apt Russell names them, she stops short of shaming them.

Instead, the book examines the interconnectedness of issues that lead to childhood malnutrition. Colonialism, climate change, economic inequality, the patriarchy, poor sanitation—all are huge factors, often in ways one wouldn’t predict. For example, women do a day’s work in the field but also do all the household chores. This means they frequently lack the time and energy to breastfeed their children. Changing the patriarchal patterns of domestic life is no easy task, and yet there are success stories among the villages of Malawi.

As this theme of interconnectedness develops, it becomes the book’s thesis: meals and medicine have a part to play, but success—as in nations as disparate as Malawi, Brazil and Vietnam—will come only through holistic means chosen and implemented locally. It’s a beautiful lesson perfectly conveyed in this beautiful book.