The Secrets of Wishtide 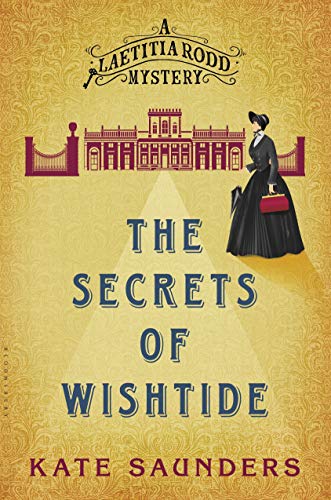 The Secrets of Wishtide by Kate Saunders is a the first of a new cozy mystery series introducing private investigator Laetitia Rodd, 52 years old and the poor widow of an archdeacon, living in mid-19th century England. It is also a story about love and both the good and the bad things it can make people do.

Laetitia, or Letty, who narrates the story in the first person, is hired by her barrister brother Fred on behalf of his client James Calderstone to investigate the background of Helen Orme, a woman whom James’ son Charles intends to marry. It is a marriage James vehemently wishes to discourage.

Letty soon finds herself investigating not only Mrs. Orme, but also a series of gruesome murders and the various love interests with which they are intertwined. Aided by a combination of good sense, apparently infallible intuition, and possibly divine intervention, Letty eventually finds her way to the bottom of the mystery.

There have been many variations on the theme of the British (usually female) amateur detective. The gold standard, of course, is Agatha Christie’s Miss Marple; but others, such as Emily Brightwell’s extensive series of Mrs. Jeffries novels, also set in Victorian England, continue to appear.

Wishtide is another in that genre, with some important differences. For one thing, Letty is not technically an amateur, as she is being paid to investigate, although investigating could not be called her profession—more in the way of occasional employment. Apparently it was one of the few jobs for which a woman in Victorian England was considered qualified.

Another difference is that Wishtide is also, to some extent, a “social problem novel,” meant to expose some insalubrious condition of society. Well-known examples in American literature are Uncle Tom’s Cabin and The Jungle, but the genre flourished also in Victorian England, and Charles Dickens was one of its greatest practitioners. Novels like Oliver Twist, Hard Times, and Bleak House decried the unhealthy state of English society, the immorality of the upper classes, and the suffering of the poor, and it’s no coincidence that Kate Saunders is a devotee of Dickens. In fact, it is a story line in David Copperfield, her favorite novel, that the author says was the inspiration for Wishtide.

Although the social condition Saunders decries—the ill-treatment of women, rich and poor, in the Victorian era—is not contemporary, and the most egregious examples (such as a woman’s being treated as her husband’s chattel) have largely been overcome, vestiges certainly remain today in Western society, the “glass ceiling” in business or politics being only one example.

Unfortunately, Saunders is sometimes a bit heavy-handed, if not patronizing, in her approach to her social theme. Rather than simply tell the story and let the grim facts speak for themselves, Letty feels she must drive the point home explicitly, as if the reader was incapable of understanding the problem without being continually told what it is: “The blame always falls upon the woman”; “How quick the world was to cast a woman into outer darkness because she dared to fall in love”; and so forth. One can almost visualize the back of Letty’s hand upon her upturned brow as she utters these lamentations. Perhaps that is just the Victorian way.

Saunders also resorts to a form of deus ex machina, a questionable literary device whereby a happy accident or coincidence, perhaps attributed to the intervention of God, helps the characters conveniently resolve a problem. Thus when the dog Letty and her cousin are walking suddenly breaks free and miraculously leads them into a graveyard and right to the grave of the person they had been seeking, she attributes it to “the hand of Providence.” Maybe so, but it seems a bit too convenient.

Finally, a word must be said about writing style. Saunders’ heroine is enamored of parentheses, to the point that they surround everything from dependent clauses to entire paragraphs. Although occasionally they are used properly to set off a parenthetical phrase or thought, more often they are inserted in what seems to be random fashion. Perhaps this is meant to be an affectation of Letty’s. Once one gets used to the practice, it becomes less off-putting; but for any reader for whom a round bracket signals the start of a qualifying or explanatory word or phrase, it seems a wholly unnecessary distraction.

Apart from the aforementioned reservations, The Secrets of Wishtide is, on the whole, a good story that moves along well and holds the reader’s interest. Letty is an engaging character, if a bit holier-than-thou on occasion, as perhaps befits a pious clergyman’s widow. It affords the reader interesting glimpses into the various strata of Victorian society, with the wealthier classes coming off quite poorly.